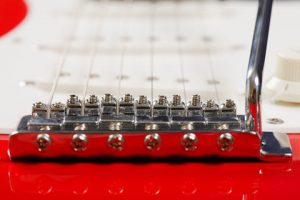 It doesn’t matter how much time you spend practicing  or how much money you spend on your gear, if your guitar’s intonation is out there will always be something that doesn’t sound quite right.

I’m often surprised when I go to a guitar store, or play other peoples instruments how many of them have bad intonation, especially (And here’s the good part!) as it’s so easy to fix yourself.

I’m not going to go into huge scientific detail here, but basically, if your guitar’s intonation is set correctly, it means that no matter where you’re playing on the neck, the notes you play will be in tune, and not flat or sharp.

Now, you don’t want to set your intonation with brand new strings on, or with old ones – if they’ve had a couple of days to settle down, you should be fine.

Regularly check your tuning while setting your intonation, to make sure you don’t drift off pitch.

If your guitar doesn’t have individual saddles e.g. A 3 saddle Tele, or floating jazz box style bridge, the same principal applies, except you may have to ‘split the difference’ between string intonation to get the best overall setting.

Now your guitar should be in tune all the way up the neck, and if you check your intonation regularly you’ll sound better, generally more in tune, and your audience and band mates will thank you!