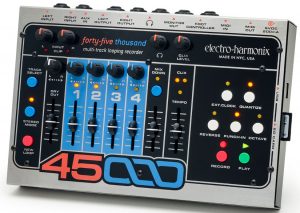 Electro-Harmonix is no stranger to the world of looping. They invented the first looper ever when they developed the 16 Second Digtal Delay pedal in 1983. Allowing musicians for the first time to manipulate their musical ideas on the spot, the unit revolutionized the concept of the “delay” effect and birthed a new type of creation tool.

Building upon their legacy, Electro-Harmonix released the 2880 Super Muli-Track Looper in 2006. This unit took the idea of the 16 Second Digital Delay and added multi-track capabilities, a traditional recording layout and ton more recording time; 2880 seconds with a 256 MB SD card, but even more with the maximum storage support of 2 GB.

The 2880 is basically the template for the brand new 45000 Multi-Track Looping Recorder, but adding key features such as the ability to store and recall up to 100 loops, a dedicated output for monitoring and of course even more recording time with SD card support of up to 32 GB of storage.

Here is a video demo of the 45000 in action – then we’ll look at some features that will shed some light on how it’s all possible!

The big improvement in the 45000 over its predecessor is the tremendous increase in storage capacity. The unit comes with a 4 GB SD card but can support up to 32 GB, which means a heck of a lot more recording time. The maximum recording time of any loop is only limited by the size of the SD card.

Along with extra space, the 45000 has added the ability to store and recall up to 100 loops, 34 of which are preloaded with different drum loop tracks. With the unit’s USB connection, users can hook up to their computers and back up or manipulate the loop files. In theory, you can create audio tracks using a DAW and drop them onto the 45000 to be played back as if they were recorded with the unit itself.

Lastly, the newly added Monitor Out, which is basically a summed mono version of the headphones output, adds a little more flexibility to the I/O.

The 45000 is super jam packed with features; so many that I’m afraid we couldn’t possibly cover them all with out writing a novel and maybe putting you to sleep in the process. So here we’ll more or less just go over the highlights.

Getting started with recording a loop on the 45000 is pretty easy. Hit the New Loop button to start with a clean slate, then hit Record and start playing. Hit Record again to stop recording and you’ll hear back what you played instantly. By default you’ll start recording onto Track 1, but you do have 4 tracks at your disposal, which you can switch around using the Track Select Button. Furthermore, you can continuously overdub parts on top of each other on a single track. Since stacking overdubs on one track doesn’t add new audio files, the number of parts that you could lay down in one loop are virtually unlimited.

The Mix Down track adds great flexibility when mixing your loops. In Mix Down mode you can dump all the audio from tracks 1 through 4 onto the stereo Mix Down track, thereby clearing off your other tracks to continue laying down new parts.

The 45000 has a few different recording modes. The Punch In Mode turns off the ability to overdub parts continuously on one track and instead will erase any previously recorded audio. You can use this mode to fix a bad note on the fly or just completely redo your part if you botch it up.

The Octave Mode slows down the speed and of your recorded loop by exactly half, making it playback an octave lower. In this mode you’ll record your part at normal pitch, but once playback is initiated again at normal speed, your newly recorded part will play back an octave higher. Using Octave Mode you can create parts in a higher range that guitars normally wouldn’t reach.

Reverse Mode, you guessed it, lets you record a part in reverse. When you record in Reverse Mode, any previously recorded audio plays backwards while you play and hear your new part normally. When the recording is done and Reverse Mode is toggled off, the new part is reversed while everything else is played again normally. With this mode you can create some interesting textural elements for sure.

Quantize Mode is particularly handy. The toughest part about looping is always stopping the recording precisely at the right time so that the loop repeats seamlessly, without any hiccups. Well, in Quantize Mode the 45000 does the work for you. Using the built in click, the unit will first give you a 4 beat count off. Then when you stop the recording, it will automatically round the loop’s length up or down to the nearest measure. This way, if you kill the recording a little too early or too late, your loop will still repeat perfectly on the downbeat.

The 45000 Footswitch is sold separately and is said to be optional, but is absolutely necessary if you want to unlock the full functionality of the unit. You can’t switch between the 100 different loop banks without the footswitch, so that’s a key feature right there. Also, having control over Track Select, Record and Play at your foot frees up your hands to focus on playing your guitar. The Footswitch connects using an everyday instrument cable, so there aren’t any special cables to buy or worry about losing.

The Electro-Harmonix 45000 Mulit-Track Looping Recorder is available for about $476, with the Footswitch coming in at about an extra $119. It is not priced for the faint of heart, but this until is a serious tool. It’s priced about on point with other high-quality, fully featured loopers on the market and competes with them strongly. One of the strong points of the 45000 is its very intuitive user interface. If you’re in the market for a serious looping machine, the 45000 Mulit-Track Looping Recorder should be on your list of gear to check out for sure.

More information is available at EHX.