And Now for Some Breaking News 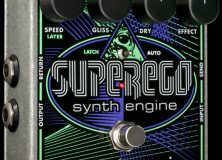 Perhaps you’ve noticed by now that we’ve had a giveaway going on. Maybe it was the article we had written announcing we were giving away a Super Ego, or perhaps it was that little pop up window reminding you whenever you stopped by the front page. Regardless of what gave it away the contest has been running amok since the advent of September and now it’s come to a close.

So who is the man of the hour? Who has defied laws of probability and risen to the top of Mount Victory?

None other than Brian Arrington.

First and foremost we would like to extend our congratulations to Mr. Arrington as he is now the proud owner of EHX’s Super Ego pedal. In due time you will be hearing from GM Jameson about the exchange of contact information and the pedal will be right on its way to you. Congrats and enjoy.

A Bit About the Legend of the Hour

For those of you who are unfamiliar with Brian Arrington it seems as though destiny’s hand had played a pivotal role in this as a pedal named the Super Ego is only fitting for someone of a Freudian caliber as he is. Arrington is known for studying the deep recesses of the psyche and has written several well respected theses on the Freudian clothesline – an occurrence like the Freudian slip only instead of accidentally mentioning what’s really on your mind you belt out the first thing that comes to mind after someone swings their forearm into your neck.

No doubt the Super Ego pedal will play into his study on the egos of his patients and test subjects and will be used to cultivate an ego so vast and endless that narcissism will seem like modesty compared to what he will have wrought.*

This isn’t the first time we’ve held a giveaway and it’s a far cry from being the last. The horizon is littered with giveaways yet to come and as we speak we’ve already got more formulating in the deep recesses of our minds. Regardless of what we offer in the future you can bet it’s going to kick ass, rock faces, and best of all be free of charge to you. It’s an honor to be able to give gear away so the best way to keep making these dreams formulate as reality is to stick around and enjoy yourself. Nothing more to it. We like having visitors and we like rewarding everyone however we can when we can. You can get a head start on the future giveaways by signing up for the newsletter now if you haven’t already, or stay signed up. Follow us on Twitter, like us on Facebook, do whatever you’ve gotta do. Just so long as you enjoy yourselves.

*I was told I’m not as funny as I think I am and often need to remind people I’m usually just being dumb.  If my greatest fears are as I think they are and I’m not really funny then just smile and nod until I shut up and walk away.