Welcome back to this multi-part series on the evolution of a live rig.  You may want to check out part 1 if you haven’t already, but in this article, I’m going to talk more about that nebulous thing called… 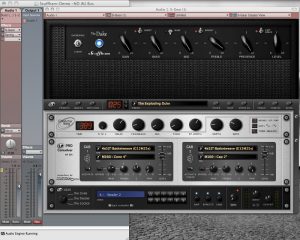 As an electric guitarist in the 21st century, you’re probably smitten with that ever-moving target called “tone”.  And how could you not be? With the seemingly endless number of tonal variants that have come down the pike since Are you Experienced?, it’s only natural that most guitarists have an itch to add their own signature tone to that number.

As someone who’s spent a lot of time trying to dial in tone; here’s a one sentence synopsis of my findings:

Tone is relative, subjective and contextual.

When I started playing fretless guitar, a number of guitarists would want to try my guitar out.  As they were playing it solo, they’d often say, “Oh this is a lot easier than I thought it would be.”  When I played a drone for them to play against (thus revealing the intonation of the licks they were playing), their opinion generally changed to, “Oh this is a lot harder than I thought.”

The initial tone you might come up with in a specific context (like your room) may not translate in another context (like a recording studio or a live stage).

I once came across a post in a forum where the topic of discussion involved requests for POD HD updates. Someone on the forum was complaining about the Marshall 4×12 cab on the unit and said that it sounded nothing like a Marshall cab.

The response from a Line 6 representative was one of confusion. Evidently, Line 6 searched high and low for the right 4×12 cabinet to model.  After talking with a number of professionals who chose a specific cabinet as “the one”, Line 6 then modeled it extremely accurately. To their ears (and their measuring standards) the model sounded like the physical cabinet.

These two people seemed to have opposing viewpoints but it’s likely both were right.

The Marshall 4×12 on the modeled unit in all likelihood sounds nothing like a 4×12 cab you might have at home.  Even if your cab was modeled, in the context of the amps and the fx on the unit,  the model and the original cab, would sound different from what you’re used to when you put it all together.

Any amp or cabinet is nothing more than a canvas to build from.

One story that didn’t make it into the Will Kennedy interview on Guitar-Muse that I wished we could have included illustrates the difference between live sound and studio sound.  Will went to see a live show of an act he had worked with in the studio and one of the things that bowled him over at the live performance was the guitar tone.   After the show, he went backstage and complimented the guitarist on his tone.

The amusing thing about this story is that the amp the guitarist was using live was the same amp they tried to use in the studio, and could not get a workable tone out it on the tracks.  They tried every mike in every position with every combination to try to make it work and it just didn’t sit in the track the way that they wanted it.   After much experimentation, they ended up using another amp successfully.

What works in one context generally won’t work in every context. (Nor would you even want it to.  It would get boring having one solution for everything after a while…).

From a playing standpoint, I once read an anecdote about how Paul Gilbert had to completely alter his soloing in Mr. Big because the flashy things he was doing in clubs with Racer X just got lost in a wash of reverb in the huge concert halls Mr. Big was playing.

As guitarists, we often have a Platonic ideal of “tone” but the reality of the right tone in the right context is often far-removed from what our “ideal” tone actually is.

Let’s say that you are trying to copy a tone from a recording of one of your favorite artists.  You may want to first consider that most guitar tones you hear on major label releases are:

In other words, it’s a very different environment than the one you have with a signal coming out of a single speaker.  As Mr. Kennedy put it in part 2 of the Guitar-Muse interview:

“Don’t make the assumption that because your tone sounds good in your bedroom it’s going to sound good recorded. You may have spent days/weeks/months picking out the perfect guitar, the perfect amplifier and tweaking the knobs by a hundredth of a degree so you sound great in your bedroom or the club, but when you stick a microphone an inch in front of an amp and listen back through studio speakers, it’s going to change. Nobody listens with their ears an inch away from an amp…. There are a lot of translations that need to happen to make a recorded guitar tone sound great…. Keep in mind that no one’s EVER going to hear the sound of your solo’d guitar. The solo button is a tool for the engineer to make critical technical decisions. That’s it….And remember the sound has to be tailored to fit the mix. That may necessitate the engineer making some adjustments that you may not feel are correct when you hear them by themselves. “

From what I understand, when Hendrix recorded Are you Experienced, they set an amp up on one wall and then set the very fragile ribbon mikes on the far opposite wall.  The amps had to be cranked to get them to distort and the ribbon mikes couldn’t handle close miking of such a loud sound source. If you go to a studio now and say you want it to sound like Hendrix, the engineer will probably throw a SM57 on the speaker grill….

While conventional wisdom indicates that big strings = big tone, ZZ Top’s Billy Gibbons (he who possesses some of the most righteous collection of tones ever) uses .007s!! He has one guitar strung “heavy” with .008s.

When I was first researching tone, I was told that the best sound I was ever going to get was a good guitar plugged straight into a good amplifier.  By far, the best live tone I ever heard was Jim Thomas from The Mermen who used the most impossible, convoluted rig I’ve ever seen (this included individual outs for each pickup on his guitar).  And to be sure friends, it was as close to the siren’s song as I’ve ever heard.

He uses Kustom amps now, but in Scotty Anderson’s awe-inspiring instructional video, he gets some killing playing across with a Tele and a little solid state Peavey practice amp.

Ultimately, “tone” is in your head.  It’s as much psychological as it is physical.

On one hand, I have spent hundreds of hours (if not more) “chasing tones” in my head or trying to get sounds that really aren’t there with the equipment I had on hand.

On the other hand, I respect the DIY attitude towards making the best with what you’ve got.  There’s a lot to be said for just “making do” and creating something with whatever is handy.  Part of being a musician is being able to make music under difficult situations – and that includes being at the studio session and playing the steel string that has rust on the strings and won’t stay in tune because that’s the guitar the producer wants to hear on the session.

Master players approach tone as an ideal.  They know what they want the tone to sound like ideally, but the mastery comes in being able to adapt to the situations around them.

I would guess that Scotty Anderson wanted a clean tone for his instructional video and so he chose an amp that would suit the confines of the video and provide a similar tone to what he wanted that he could work with.

Eddie Van Halen could plug into any amplifier and it would still sound like Eddie.

It’s the thrill of the chase.

As the wise man once said, “It’s about the journey, not the destination”.   For me, chasing tone has become less about finding the one-size-fits all tone and more about the process of exploring why things sound good or bad to me.  That deeper inquiry gives me a better chance of getting my tone regardless of what gear I’m playing on.

Tone is really just an extension of you and what you have to say as a musician.  The best tone in the world with the worst vibrato is still going to be a shite tone.   In the end, tone is only a platform for expression.

In the next post, I’m going to talk about some specific tube amplification options I’ve used in modeling and a strategy for getting a more consistent tone.  Hope to see you there.