Evolution Of A Live Rig – Part 3 – Tweaking The Frankentone (Or Models, Tubes and Match EQ)

In the previous Evolution Of A Live Rig articles (part one and part two), I discussed developing a live rig over time.  In this part of the series, I’ll talk about how I chose an amplifier for my rig and how I then worked around the sound of the amp to tweak my live tone.

Despite how insane it may sound to an audio expert, in my experience tube amplifiers seem to “push” speakers in a way that project sound from differently than solid state amps do in a live setting.  In terms of stage projection,  50 watts doesn’t always equal 50 watts.

Once upon a time, I played in a group that had its origins in a tribal rock sound and gradually became more of an industrial group.  John, the main creative force of the band, had a Line 6 Vetta that sounded really good on the group’s recordings and in the rehearsal space.    As a sound source, the Vetta was incredibly flexible and could do things that were impossible for my amp set up.  In a live context however, my rig (generally a version 2.0 of the Line 6 POD in front of a Fender Hot Rod DeVille) filled in the space with a completely different depth than his tone alone.  Sonically, it was the difference between perceiving two dimensions and three.

I’ve had very mixed results using a modeler with an amplifier as most guitar amplifiers radically change the tone of the modeler.  To hear an example of this,  try getting an 1/8″ -> 1/4″ cable and sending the signal from headphone out of an mp3 player to a guitar amp input.  In addition to going through the amplifier circuit (which will make it louder), the signal would first be sent into the preamplifier which would amplify and color the tone with the EQ controls.  Music amplified this way often sounds “weird” as the amplifier acts as a radical EQ for the source signal resulting in either boosts or cuts in the low end, midrange and/or high end depending on the amp.

The same thing happens with using an amp with a modeler.  if I’m playing a Mesa-ish patch on my modeler and running it into a Fender Twin amplifier, the sonic result is like taking the signal from a mic’d Mesa amp and using the Fender amp as an additional EQ.   Running the signal in this manner can have good results, but will generally require making (sometimes drastic) alterations to the initial tone of the patches.

It also means that you’d probably need to create (at a minimum) 2 patches for any sound you wanted to use:

The Benefits Of Atomic Power

Line 6 has come a long ways from it’s Vetta days and has done some really interesting work with (tube amp guru) Reinhold Bogner.  The latest culmination of this collaboration has been an integrated solution of the DT amplifier series and the POD HD.  Working in that combination, the DT’s are super slick and sounds great but they weren’t avaliable when I was originally looking for a solution.  They’re also a little pricey as tube amps go.

Many of you have probably heard of Fractal Audio (creators of the AXE-FX II) but might not know about Atomic Amps (who shared a website with them for a time).  The Atomic Reactor amp removed the pre-amp and EQ circuit of a standard tube guitar amplifier.  While this might sound like a strange thing, the result was a tube power amp that will “warm up” the digital signal from a modeler (or any other multi-fx).

Before their current FR amps and Reactor 50/50’s were released, Atomic’s previous product line consisted of three tube amps that were designed by amp guru Harry Kolbe with the specific intent of being used with modelers: 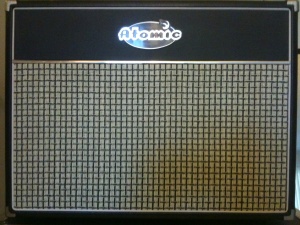 In terms of features, the lack of a fan makes it pretty quiet for studio use, but some users will be turned off that the 18 watt’s lack of both a bypass switch and a master volume.  The amp just runs a straight 18 watts and the volume level is controlled by your modeler (or your guitar’s volume knob).  As many tone purists like the sound of power amp distortion,  the advantage of running the amp full-bore is that the signal can be distorted in a pleasing way when pushed by the input signal hard enough (and dialed back with the input signal).   Both amps use a proprietary docking system that allow you to mount a modeler into the unit as an integrated pre-amp and amp.  For example mounting a POD BEAN in the amp not only provides power to the POD but also full connectivity to the unit by just plugging into the amp’s input. If you’re not using the integrated dock (or using an external modeler) you can use the FX return as a guitar input which bypasses the integrated input.

This amp uses a 12AX7 and 2 6L6GCs and also uses an Eminence Megatön 200 W 12″ speaker mounted in a tuned (and ported) birch ply cab.  It has a master volume control, a stereo FX loop (with a mono option), a bypass switch and an external 8 ohm speaker connection.  It’s probably 15 lbs heavier (or more) than the 18 watt (the 50 watt has 2 metal handles mounted on each side as opposed to the 18 watt’s single rubber handle), but is still pretty easy to move around.

The EQ isn’t the only thing coloring the tone however. The speaker and speaker cab also have a big impact on the sound and these Atomics are more translucent than transparent sonically meaning that you won’t get the same frequency response that you get out of a Full Range PA.  Having said that, the tone that comes out of the amps is very smooth.  Additionally, I don’t get the ear fatigue playing through these amps that I sometimes get through headphones.

The amps are mono.  If you’re wed to true stereo effects live, you’ll need at least two of them.  I’ve used these with PODS, POD FARM and POD HD live and everyone I talked with were surprised to hear that the distortions weren’t coming from the amp.

(Here’s another cool tip: since the amp has a ported cab and is eq’d in the lower registers, running directly into the amp with no modeller has a pretty hip bass amp tone.  You don’t get the super low-end of a 15″ or 18″ speaker, but it can certainly hold its own.)

While I’ll show you how I tweaked my patches to work with my Atomic amps,  the process I’ve used can be adapted to any amplifier that you’re using. ( I should note that the current Atomic line is Full Range Response, so this EQ tweak might be less of an issue.  If Atomic’s Tom King wants to send me an evaluation unit, I’d be happy to give a more formal and official evaluation of that statement as well ; ) ).

In modeling, there are at least 4 different scenarios for setting up sounds:

While you might think that there wasn’t a lot of tonal variance,  the differences between these parameters are huge.  I have patches that have sounded mediocre at low volumes and sounded quite good when the volume was goosed a bit.  I also have headphone patches that worked well at home and fell apart live (and vice versa).

Fortunately, we live in the 21st century, so trouble shooting the problem of a consistent tone is easier than you might suspect.

For those of you with a recent version of Logic, the Match EQ is one of the coolest plug-ins that the unit ships with.  It’s not a miracle worker in terms of being able to take a clean signal and make it dirty (or vice versa) but it can match the EQ curves of a signal recorded the same way.

In this case, I tracked a guitar with the POD HD 500 in Studio/Direct mode.  One line went direct into Pro Tools, and one went into my amp. I opened a new Logic session, imported a short recording of the mic’d Atomic amp onto an audio track and inserted a Match EQ plug-in.

Here are the steps I used:

1. If you control click on the template learn – you’ll get a scroll down menu.  Select “Generate Template Spectrum from Audio File….”
2. Since I want the signal in my amp to sound more like my POD signal I need to compare the mic’d signal to the direct signal.  So I loaded the POD direct signal audio file.

3.  I then clicked on The “Current learn” button and played about 10-12 seconds of the mic’ pod track.
4.  Clicking the Match EQ button shows the difference in EQ between the POD and the Atomic.

These are pretty specific, so if you want to go for a more general EQ curve – just increase the smoothing:

The next step was to go to my “go to” patches on the POD and setting up a separate bank with some of these EQ shifts so they sounded more similar on the Atomic.

Even making these tweaks won’t give you tones that sound exactly the same, but the tone will sound a lot closer between the direct EQ and the amp EQ.
.

That’s it for now.  In the next post in this series, I’ll show you my current gig-worthy rig that I can also get on and off a subway!

Please check out the other installments in the “Evolution Of A Live Rig” series:

Well, obviously I meant connecting the modeler to the return.

Is it not the same as the Atomic amps connecting the guitar to the effects loop return of a normal amp to bypass the pre-amp?