Are Fans Ready for A New Slayer Album?

Slayer’s Comings and Goings in Check

It seems like I can’t go a day on the internet, browsing from one site to another as I usually do, without catching some sort of wind about Slayer and what their getting into. This is fine and all. I like Slayer. But it seems like recently everything has just been a big effort to portray the band in a negative light. That is a debate I have neither the interest nor the perspective to weigh in on. When it comes to portrayals in the media I was always raised to be very wary of easy it can be to guide peoples’ perceptions. 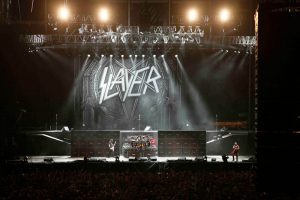 I’m not big on judging character from something I’ve read, so don’t expect me to deliberately pile on accusations, name names, or anything of the sort.

Instead, there has been a thought that’s lingered in my mind recently. Being a Slayer fan I have to ask are the fans really ready for another Slayer album? The band has been hard at work on a new album for what? The majority of the year? Give or take?

Then the skies started falling. Drummer Dave Lombardo had parted ways with the group and not long after that, with almost poetically ironic timing, guitarist Jeff Hanneman had, who was already absent from the band, passed away.

Personally I never expected any of that to stop Kerry King and Tom Araya from pushing Slayer forward. Hanneman was already on medical leave and Lombardo’s parted with Slayer before. Not to mention King had made it clear interviews that even when Hanneman was alive, the band would continue to move forward.

So this is the hand that’s been dealt. It’s not a pretty one, but life does that.

Now back to my initial question.

Is the Fan Base Ready for a New Slayer Album?

This is not a question I ask because I think the fanbase is entitled to any specific outcome.  Far from it.  Believe it or not I mostly ask this question out of the better interest of the band.

The surviving band members have all been interviewed enough in the past few months. Kerry King and Tom Araya have both made it clear that despite losing two members in such a small time frame, the show must still go on.

And that’s totally fair. Everyone needs to take time to balance expenses and revenue. Like those clowns at the local car dealership that keep calling me to see if I’ll sell my car. They don’t bug me for the thrill of the chase. They need to eat, and getting people onto the lot is how they make that dream a reality. Sometimes music has to be looked at in the same way.

It’s a sound ideology that music should 100% of the time be seen as a pure and untarnished art form. And it should. But when a tattooed grizzly bear has been paying the bills with music for the past 30+ years, that person is not primed to switch careers at the drop of a hat. Sometimes you’ve gotta take care of business. It doesn’t require anyone like it. That’s just how the world works.

People were bitter about Lombardo and saddened about Hanneman, and ever since then there’s been this cloudy funk looming over the Slayer camp.  The fan base is restless.  If too many people are ambivalent then how well will the album sell?  How many fans will come out to see the live shows?  Personally I think the fans are more ready for a hiatus as opposed to a whole new album.  Some time to let the dust settle a bit.

Now that I think about it… Slayer has suddenly found themselves in the same position as both Dream Theater (when Mike Portnoy left) and Slipknot (when Paul Gray passed away) at the same time.  The band wanted to move forward, then the drummer ordeal.  Then the show started to go on and then… well… Hanneman.  So what does the band do?

Slipknot, after three and a half years since Paul Gray died, have just recently started writing for a new album.  Dream Theater didn’t miss a beat and kept moving forward.  So what’s the right answer?

Well, there is no right answer, and in the slew of events Slayer has decided to push through.  They are looking to start recording their next album in early 2014.  The wheels are turning, and I wish them luck because I’ve got a hunch that it won’t receive a warming welcome.