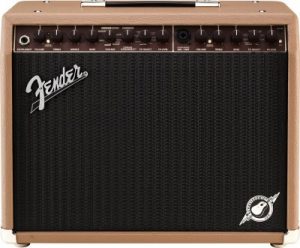 Fender has recently released the newest additions to their acoustic guitar amp line-up. Gigging acoustic players will be pleased to see that theses new amps from Fender are now lighter, louder and tout even more features than anything previously released in the Acoustasonic line.

Fender has packed lots of power in an easy to lift package.

The Acoustasonic 100 combo, which weighs in at a mere 18 lbs, includes a 100 watt solid-state power amp with a single 8″ driver and piezo horn tweeter. The Acoustasonic 150 combo, which weighs 22.5 lbs, includes a 150 watt stereo solid-state power amp (75 watts per side) and has two 8″ drivers with a single piezo horn tweeter. The speaker cabinets of both models are constructed with strong 5-ply lightweight plywood.

The new Voicing feature, found on both amps, allows acoustic players to dial in settings to simulate the sounds of Drednought, Parlor and Jumbo style guitars. Of course Voicing can be bypassed for those who do not wish to taint the tone of their instruments. The flexible Voicing feature also includes amp models for electric guitars, with settings for Blackface, tweed and British amps styles. This opens up the Acoustasonics to possibly perform double duty for those guitarists who gig with both acoustic and electric.

Both amps come with an instrument and microphone channel, each with its own independent EQ, volume and effects control, plus a feedback elimination switch. Effects include Vibratone, chorus, reverb+chorus, chorus+delay, delay, reverb+delay, plate, room and hall. The instrument channel also has Fender’s patented String Dynamics control to help tame harsh treble notes. On the back you’ll find a balanced XLR line out, a stereo effects loop and a USB output for digital recording (and possible firmware updates).

In with the old, out with the new – Until just recently, the loudest and most fully featured acoustic amp available from Fender was the Acoustasonic SFX II: a 2×80 watt amp that weighs a hefty 54 lbs. While you can still buy the SFX II from retailers online for about $900, you wont find it on Fender’s website anymore.

So it would seem that the new Acoustasonic 100 and 150 combos are taking over the top spots in Fender’s acoustic amp line, and why wouldn’t they? They carry over many of the same features from the SFX II, include the new Voicing control, and wrap it all up in a sleeker, more streamlined package that’s about half the size, weight and price.

However, in the redesign I guess Fender had to decide to get rid of something. Two things you won’t find on the new 100/150 combos is a master volume and an auxiliary input. In my opinion, not having the master volume is no big deal, but the loss of the auxiliary input is kind of a bummer if you’re the type of player who performs with backing tracks or drum machines.

Bottom Line – The Acoustasonic 100 and 150 combos are designed to compete fiercely in the $400-$500 price range. You’ll be hard pressed to find a more feature filled amp even by spending twice as much. Assuming these amps deliver the high quality sound Fender is known for, they’re bound to please a lot of gigging guitarist. If you’re in the market for an acoustic amp, you should definitely check out the new Acoustasonic 100 and 150 combos.

Get more details specs, and purchase info on: