Before we get to more Fender News, I thought the following bite was noteworthy:
Legendary producer, musician and TV personality awarded NAMM’s highest honor. 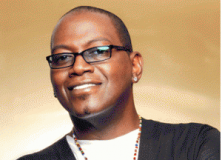 Carlsbad, CA, January 24, 2013—The National Association of Music Merchants (NAMM) honors legendary music producer Randy Jackson with its highest honor, the “Music for Life” award. Jackson is recognized for his pervasive influence in the music world, and his longtime encouragement of budding music-makers. He has performed with Journey, Aretha Franklin, Bob Dylan, Jerry Garcia, Keith Richards and countless others. Congrats, Randy. You worked for that one.

Back to Fender News…

Bearded folky and bluegrass types with a penchant for rocking out, your time is now: 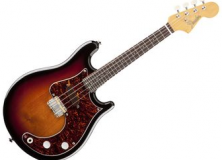 Featuring an alder body and a bridge made on the same machine that produced the parts on Fender’s electric mandolins from the late ’50s, the Mando-Strat is precisely half rock, half folk, and has an SRP of $399.
This highly distinctive and charmingly diminutive instrument evokes the Fender electric four-string mandolins of the 1950s and ’60s, with an updated and improved design for modern players.
The distinctive shape and chiming tone of Fender’s late-’50s electric mandolin are back, with features including a solid alder body, 13.78″ scale, “C”-shaped maple neck with 24-fret rosewood fingerboard, and specially designed pickup with volume and tone controls. Other features include a vintage-style bridge with chrome plate made on the actual machine used to produce the original parts half a century ago, three-ply tortoise shell pickguard, vintage-style tuners, and chrome hardware.

Amongst a number of innovations, Fender has issued Vintage Hot Rod versions of both the ’57 and ’62 Strat. The idea is to build a guitar with a number of modern features to suit all players while providing classic styling and feel. For example the ‘57, shown, features a DiMarzio Tone Zone in the bridge to go with two SCN single coils, while the ’62 features a trio of US Vintage single-coils with a reverse-wound, reverse-polarity middle unit and our favorite Fender color of all time: Sherwood green. (Note: In USA, only Sunburst and White.)

Both also offer an ultra-thin nitrocellulose finish and a flatter fingerboard radius, and neatly fill the gap between production models and models from the lauded Custom Shop.

Also benefiting from a rethink is one of Fender’s best selling signature Strats, the Yngwie Malmsteen model. New features are subtle but have been introduced to mimic Malmsteen’s own number one guitar more closely. The three-way switch and DiMarzio pickups remain in place, but the new version will have a bullet truss rod nut and machine screw neck mounting.

Like its passive-electronics 2012 predecessor, the Fender Select Active Jazz Bass takes Fender’s most versatile bass to new heights of elegance and power.