Fender Guitars: What’s The Difference Between American And Mexican? 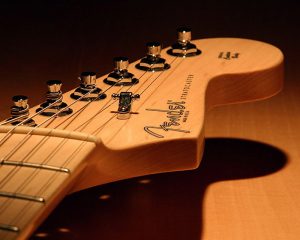 Anyone who has played guitar more than a day has wondered what differences there are if any real differences between Fender’s American built and Mexican built guitars. I’ve met people that swear up and down they’re completely different, those that insist they’re exactly the same, and fence-sitters that just don’t know what the hell is going on.

I’m an owner of three Stratocasters (American, Mexican, and Squier) and I’ve wondered about the differences between them on a number of occasions. Even though the idea was right under my nose it wasn’t until my esteemed second in command Jameson suggested I research it and document my findings? Makes sense. We do write about guitars all day anyway.

Anyway. What better place to start than to call Fender directly and just ask them?

What are the differences?

My call to Fender’s customer service my path crossed with some guy whose name I have long since forgotten. After trivial introductions I’d laid the most predictable question out on the table.

What is the biggest difference between American and Mexican?

The answer wasn’t quite as elaborate or even as sexy as I was hoping, but never the less I was informed the biggest factor is simply the cost of labor. That doesn’t leave a lot to the imagination, but fortunately I had backup questions in case something like that happened and sure enough additional differences as well as similarities surfaced. 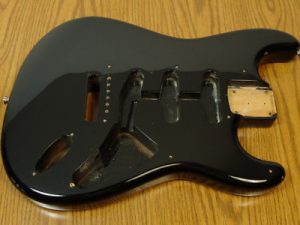 As I was informed the wood supplied for the guitars is the same through and through. It all comes from the same place, same type of trees grown the same way. There isn’t some esoteric, uber-organic, special breed of alder reserved for the American models.

The process of assembling the guitars is the same in both countries as well. Fender’s alder body and bolt-on neck approach is the same across the board in most cases, so the general feel isn’t going to be outlandishly different in that regard, though the finish that goes on the guitars is different.

In Mexico they apply a finish of polyester while the American models get polyurethane. Both finishes are known to be rather hard and durable with but a minor difference in density and cost. Some speculate these finishes can have an impact on the sound of the guitar, but my ears aren’t qualified to defend one side over another.

The Hardware and Electronics 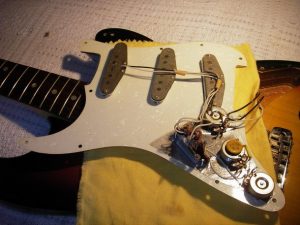 Fender’s standard procedure for all electronics, pickups, and hardware is to use their own designs. The only exception to this is in special cases where they would use someone else’s pickups, usually as seen in signature guitars. Apart from that all tuners, bridges, pots, pickups, everything is designed by their engineers.

The difference on how these parts are handled is who manufactures them. For the American model all parts are manufactured within America. In the case of Mexico sometimes parts are shipped from America and other times their designs are turned over to a third party manufacturer who then builds the parts and ships them to the location where the guitars are being built. The parts that are outsourced are built by CTS and Switchcraft.

Some of the hardware, like bridges to name one, are designed to be interchangeable between both models, while others are designed exclusively for one or another. I’m merely speculating at this point, but I would guess that means there is a greater ratio of similarities between higher end Mexican models and lower end American models.

In the case of Squier guitars all parts are manufactured by third parties in either China or Indonesia.

The QA procedures are all the same as well. Both countries have a set criteria to run through to ensure they’re not sending off a some busted piece of junk and after that all guitars, regardless of their origin, are shipped to their main distribution center in Ontario, California where they undergo a second QA process just to make sure.

Overall there are a number of hardware and electronic differences between American and Mexican, sure, but there’s an overwhelming similarity too. With the cost of labor being the biggest variable in why Mexican models cost less than American it skews the middle ground between the two.

A bunch more…
The US model has a wider string spacing, and the neck is wider at the nut. It also has real magnetized pole pieces vs. unmagnetized steel pole pieces with a fridge magnet glued to the back on the MIM (2 fridge magnets) and Squier. The real alnico pickups are much more piercing, and clear than the mexi and squier. The trem block on the USA is much larger and more dense. The USA model uses what appear to be higher quality tremolo springs (mine came with 5, vs. 3 on a Squier/ MIM). Also, the USA has a 2 point tremolo vs. a Mexi or Squier have the vintage 6 point trem. The USA has a micro tilt adjustment, and the Mexi & Sq. do not. The tremolo arm on the USA is much thinner and screws in to the block at an angle (I actually think the USA trem-arm feels cheaper than the mexi); the USA trem arm flexes and feels like it might snap off. The fretboard is a lot thinner on the USA model (for rosewood). The Mexi and Squiers have different fretwire which is not leveled out. The USA Strat tends to have very agressively leveled fretwire (flat on top). The USA necks have much thicker finish on the neck, and the finish is gloss (I actually prefer the Mexi Strats dull, thinner coat). The USA Maple fretboards are heavily coated after the frets are set, and the coating globs around the fretwire. The tuners are a million times better on the USA than the Squier, the tuners on the Mexi are pretty decent, but not as good as the USAs. The USA has far superior wiring and electronics is comparison to the Squier. The Mexican Strats are pretty decent for wiring, but the pickups are not real magnetized Alnico. The string t’s on the USA have rollers, vs the Squier and Mexi have crappy sharp metal t’s. The biggest noticeable difference in feel is the USA’s wide string spacing, and the biggest difference in sound is the real Alnico pickups.