“Players continue to praise the Pawn Shop Series for evoking the more eccentric Fender® creations of the mid-’60s to mid-’70s while still delivering thoroughly modern sound and quality. – Fender® website

Six-string enthusiasts on the prowl for something a little bit different may want to check out Fender’s® innovative Pawn Shop Series of guitars. Several unique electric models have been unveiled for 2013 which most likely won’t break the bank.

In 2011 industry giant Fender® launched its Pawn Shop Series of guitars, a concept which has proven to be quite successful. It’s no surprise an innovator like Fender Musical Instruments Corporation® came up with such likable designs. But what exactly is the “Pawn Shop Series?”

According to Fender®, the Pawn Shop collection is an “unconventional assortment of ‘guitars that never were but should have been,’ with new models and the welcome return of some seldom-seen classics.”

As a side note, have you seen Bob Weir’s “Pepto” Strat? It was aptly named after the color of Pepto-Bismol®. The Pawn Shop Offset Special is also available in pink. There is definitely something special about pink guitars. For some reason, the pink ones ooze with vintage nostalgia.

Besides having that typical Fender® magic, Pawn Shop axes rely heavily on a blast-from-the-past type of vibe.

Here’s a rundown of the four new Pawn Shop additions from Fender®: 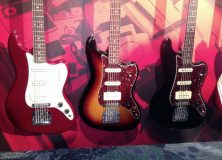 The Pawn Shop Super-Sonic™ is a takeoff on the Squier® Vista Series Super-Sonic, last produced during the 1990s. Nevertheless, everything about the current Super-Sonic™ deserves notice, from the reverse offset alder body and apple red, dark gunmetal or sunfire orange flake finishes, to its upside down headstock.

A maple neck, rosewood fingerboard and 22 medium jumbo frets are customary on this 24″ scale package. So are the Atomic Humbucking pickups at the neck and bridge and the 6-saddle synchronized tremolo with requisite whammy bar.

The Pawn Shop Bass VI, modeled after a similar Fender® product made in the ‘60s and ‘70s, is a true bass guitar. Sporting a Jaguar® silhouette and a 30″ scale, the Bass VI, which of course has six strings, comes equipped with an alder body and maple “C” shaped neck as well as 21 medium jumbo frets.

Available in 3-color sunburst, black or candy apple red, two Special Design Hot Single-Coil Jaguar® pickups at the neck and middle position and a JZHB humbucker at the bridge are standard on this distinctive bass box.

The Pawn Shop ‘70s Strat, offered in 2-color sunburst, black or vintage white, is perhaps the most impressive of Fender’s® bunch. Shaped like a typical Stratocaster®, the ‘70s Strat uncharacteristically has a standard single-coil Tele® pickup at the neck and an Enforcer™ “Wide Range” humbucker with downsized cover in the bridge position. Instead of a Stratocaster® style tremolo, the ‘70s replica has a 6-saddle hard tail bridge, naturally without a vibrato bar. 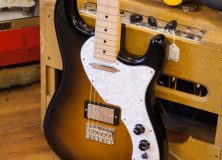 In addition, the pawn star Strat has a maple neck and fingerboard, 22 medium jumbo frets and a 25.5″ scale length.

Rounding out the pack is the Pawn Shop Mustang® Bass. This 30″ scale length four-string is based on the “Competition” bass produced in the ‘70s. The “C” shaped maple neck, rosewood fingerboard and 19 medium jumbo frets call to mind Fender®’s legitimacy as a genuine classic.

Each Pawn Shop series instrument comes with a deluxe gig bag and a manufacturer’s suggested retail price of $1,079.99 though look for a lower cost online.