The Recent Stir On Richie Kotzen

In recent news king-sized guitarist Richie Kotzen’s signature Fender Telecaster has been announced that it will see a global commercial release right off that bat in January of 2013. Currently for as long as he’s had the signature model it’s been a Japan and Europe exclusive. It’s been a popular model in both of those regions so it only makes sense to expand the product and with a January release right around the corner it will come available while everyone is sitting on all that gratuitous holiday cash. 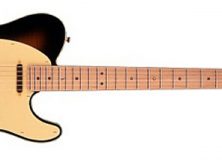 With this new knowledge that Kotzen’s Telecaster will be on the market for the western hemisphere one would have to wonder just what we’re in for. Fortunately we have the means to alleviate you of the blank void in your mind where that inquiry has taken up residence.

Richie Kotzen’s long time interest in ash wood is expressed in his signature model as the body and it’s decorated with a quilted laminated maple top. The neck is maple with a satin finish and a maple fretboard. Kotzen has a couple of finishing colors used for his guitars including a brown sunburst and the classic seafoam green, but details on which one if not both haven’t been unveiled and preemptive promotions have only featured the sunburst model, so I would say it’s safe to assume that one for sure.

In the world of hardware and electronics all hardware is gold plated and it uses a DiMarzio Chopper-T rail pickup in the bridge position and a DiMarzio Twang King in the slimmer traditional Tele neck position.

While it’s scheduled for a January release a specific date hasn’t been unveiled nor has detailed pricing information.

A Brief Look Into The History Of Richie Kotzen 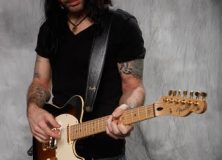 Richie Kotzen had entered the industry at the ripe, young age of 18 in 1988 and it didn’t take long for him to become known as a complex shredding machine. Seriously. People could give him credit cards or important documents and he could just play guitar and magically the cards and documents would be shredded.. He saw greater reaches of attention when he joined Poison as a replacement for C.C. DeVille who had departed to tend to his drug problems. He toured and recorded the album Native Tongue with them through the year of 1993.

After a brief tenure in the band he was dismissed for a scandalous affair and later came upon the opportunity to join Mr. Big after Paul Gilbert had left to reform Racer X. While with Mr. Big the group pumped out two studio albums and one live album recorded in Japan.

Over the entire span of his career he’s released over 50 albums half from his solo project alone which has had nearly an album released nearly every year since 1994 alongside his collaborations with countless other guitarists. In his earlier years fresh out of the 80s the decade’s influence was noticeable on his style with his speedy sweeps, legato, and shredding, but he’s evolved his style over time and has become known for being more down to earth and able to play fluently across multiple genres from jazz to blues to rock to metal to soul to you name it.