Finding the Key You’re Playing In

Don’t Get Locked Out

One of the most common issues I’ve come across in my professional career is musicians who don’t know – and don’t know how to know – what key they’re playing in. This may seem like a question with a straightforward answer, but like many things in music it can get a little cloudy. If you’re one of these people having a hard time with this, I’d highly suggest you read every one of my previous articles. If you refer to them as you read this one, it’ll help you through some of the trickier terrain. 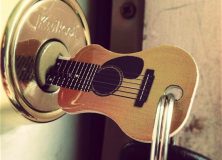 A great place to start is to figure out what actual notes are part of a tune that you’re playing. Whether or not it’s a piece written by someone else or one of your originals, a tried and true method is to jam along. Nine times out of ten you’ll find yourself doing more fishing for the right notes than actually playing. But that’s exactly what you need to figure out: the right notes.

Let’s take “Rockin’ in the Free World” – a progression we’ve looked at before. That tune starts off with a big fat E5 power chord which later reveals itself as an E minor. This chord instantly feels like “home”, so it would be a good place to start. The following chords are D major and C major, so we know that both D and C notes are present as well. We’ve now discovered three notes out of seven before even picking up the guitar. What I and many others like to do is noodle around until we find the other four notes that sound good over this progression. It may take some time before you can instinctively seek these notes out, but it’s helpful ear training.

While you’re fishing, let’s attack the same song from a different angle. Those chords E minor, D major, and C major also reveal notes from the key other than their respective roots. If we look at their thirds and fifths we’ll find more clues:

If we lay all those notes out alphabetically from the “home” note E, we get:

Now we’re cooking with propane. We’ve found all seven notes that make up the progression and we’ve built a scale out of them. What’s required is a little bit of reverse engineering. Using scale formulas, we’ll find that these notes are actually an E natural minor scale. Scale formulas take a long time to memorize so during your learning it’s handy to have some kind of reference book or chart available. This is a great time to point out that every musician should familiarize themselves with key signatures and relative majors/minors. Doing this will eliminate the added step of having to decode the scale itself. We can just recall from memory that the keys with one sharp (F♯) are always some form of G major or E minor (the relative minor).

So at this point through brute force (fishing for notes) and through logic puzzles we’ve pretty definitively proven this song is using notes from the key of E minor. The next step is determining whether the tune is modal or tonal in nature. We’ve determined in the linked article that this tune is in fact modal. To be specific, it pretty much screams E aeolian.

Voila. You’ve found the key. You might be thinking “that’s a lot of pre-reading to be done just to figure out the key”. Yes it is. That’s why so many people have problems with keys. The fundamentals have to be there. In some cases, you might even have to learn two concepts at the same time for both to make sense.

Wrenches are thrown into cogs when we get into more harmonically complex music. It doesn’t just have to be art music of any kind. There are key changes all the time in pop country coming out of Nashville. Bands like Muse make their bread and butter with surprise chords and secondary dominants. Death metal as a genre is even generally atonal. The more we get familiar with these kinds of tangential topics and techniques, the more we realize how ambiguous and rich some of our favourite stuff is.

Case and point would be the song “Karma Police” by Radiohead. Throughout, the band nimbly walks the line between A natural minor and A dorian. More than once, they rely on some kind of modally borrowed chord to break up expectations. At the end of the song there’s even a tonal center shift to B minor. Simply asking “what key is this song in” is a question with three possible answers, all of which are essentially correct. In this case, we have to think of the song as a whole, in sections, and chord to chord in order to masterfully navigate the terrain.

A lot of metal relies on this kind of constant shift. Thrash and prog metal are two specific subgenres that make good use of ambiguous keys and angular musical content. Check out “Erotomania” by Dream Theater for a classic example of a tune that shifts perceived “home” notes section to section. Once again, thinking about songs like this in bits and pieces will provide better results.

A final caveat: just because a song uses one surprise chord doesn’t mean it’s now in a different key. If you’re analyzing a song and it seems like it’s in A major, but one chord or note doesn’t fit, it’s likely just some kind of borrowed harmony. See if you can figure out how the mystery chord functions harmonically, and you’ll be that much closer to understanding the song and music in general.

Freshen Up Your Progressions

Why You Don’t Sound as Modal as You’d Like

Harmonic Areas And Their Usefulness