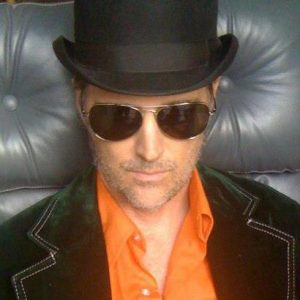 I remember Kik Tracee mostly due to Stephen Shareaux’s amazing vocal style. From well controlled screams to venemous deeper sounds, he seemed to have the perfect voice for any style the song required – a contrast to many of the vocalists at that time, in that genre.

I love the fact that musicians never stop being musicians, as you probably know, it’s something that is a part of you, and it keeps bubbling to the surface regardless of the direction your life takes.

The new album is in the works right now – and if you’d like to help Stephen get to his goal, you should check out his IndieGoGo campaign.

Meanwhile – here are a few of the tunes you’ll remember from Kik Tracee:

You’ve got to admit – Stephen has a killer voice, we’d love to hear more from this guy!

For those of you who don’t know who I am, I was the lead singer in the rock band Kik Tracee on RCA back in the early 90’s,” Shareaux continues. “I have obviously grown, not only as a person but as an artist, since then and what you’ll be hearing on this debut is a direct result of the experiences, trials, tribulations, good, bad, the ugly and beautiful of the last decade or so. For the ever loyal Kik Tracee fans who are still out there, and I know you are because of your endless weekly Facebook messages and friendings, this record will in some way be a field trip down memory lane of sorts or an experience entirely new I’m sure. Either way I think all will be pleasantly surprised, as well as myself!

Kik Tracee was formed in 1988, in Los Angeles, California – just a few years before the Grunge and Alt Rock genres came along and boogered everything up for us metalheads. Kik Tracee was seen on MTV’s Headbangers Ball, and released their first album in 1991, which was produced by Slaughter’s Dana Strum.

They also released a follow-up album, called Field Trip – which still finds its way into my playlist today. There was also another recording done, in 1993 – but it was unreleased as the band broke up before they could bring all the pieces together.

If you help out with the campaign, of course you’re entitled to some goodies, you can find out all about that here. IndieGoGo (headquartered in San Fransico, Ca.)  has been helping artists support their musical projects since 2008 – making use of the increasingly popular “Crowd Funding” model.