For only 90k, I could have a little piece of music history.

Ah, the elusive Holy Grail: the guitar of guitars; the icon of all icons. Of course, the term means different things to different people—different guitars to different guitar players—and I wouldn’t dare argue which of all the celebrated six-strings out there is the most holy (or should that be “the Holy Grailiest?”). But I do know I came face-to-face yesterday with a Guitar That Matters. To some, it could even be The Guitar That Matters.

If you’re not familiar with Freddie Green, or Stromberg guitars, or if you don’t care about arch-tops or big-band rhythm, you might as well move along—nothing to see here. But if any of those things have meaning to you, you’ll appreciate why my pulse quickened as I strolled around Gruhn Guitars in Nashville.

First of all, the place is wall-to-wall guitars. Some have histories, some are new, some need more love than others; but by and large, any would make a nice addition to my collection. Being a long-time customer, I’m a bit desensitized to both the staggering array of the inventory and the prices. Still, when I saw a 19-inch, 1940s-era, blond Stromberg arch-top in a display case, I felt a rush—but nothing I couldn’t handle.

Strombergs normally fetch a hefty price—anywhere from $15-60,000 is not unusual—due to both their quality and their rarity. Generally regarded in a class with D’Angelico alone, these highly coveted beasts were among the few “orchestra cannons” capable of cutting through an entire big band. Only around 640 were built, and the last was made in 1955.

This particular example, a top-of-the-line Master 400, had the makings of an exceptional instrument. The display case alone indicated, “Can’t touch this.” Peeking through the glass, the $90,000 price tag confirmed it. But what I didn’t pick up on immediately was the significance of the “FLG” monogram carved into the mother-of-pearl marker at the 15th fret.

As I admired the sheer enormity of both the guitar and the price, my friend Keith Gregory, a longtime Gruhn staffer, mentioned the instrument’s pedigree: it belonged to Freddie Green, rhythm guitarist with the Count Basie orchestra for nearly 50 years. This was even more special than I realized.

Freddie Green: The name is synonymous with big-band rhythm guitar. Freddie’s voicings set the standard for modern orchestral guitar; his tone and power were awesome; and his legendary timing was impeccable. Dennis Wilson, a trombonist and composer-arranger with the Basie band, was quoted in a 1985 People magazine article: “It’s as if in the Bible they said, ‘Let there be time,’ and Freddie started playing.”

In addition to his chops and tremendous musicality, Freddie was notorious for a few things:

Early on, Green was usually seen playing a big sunburst Epiphone Emperor. He purchased this Stromberg in 1940 (and a less ornate, sunburst Model 300, shortly thereafter) and played them almost exclusively until 1955, when the father and son team of Charles and Elmer Stromberg both passed away. At this point, the price of Stromberg guitars jumped, and Freddie became concerned about taking his valuable—and now irreplaceable—instruments on the road. He entered into an endorsement deal with Gretsch in 1958, playing 18-inch blond Eldorado models onstage from then on. 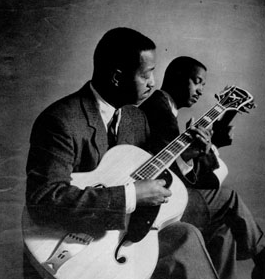 (From a 1959 Gretsch advertisement)

Since Freddie played a few guitars during his tenure with the Basie band, it might be hard to confer best-of-the-best status on any one of them. Is this Stromberg the Holy Grail? Maybe not … but it looks pretty all-powerful to me.

As for Freddie Green’s status among the greatest big-band rhythm guitarists—ever—there is no question about his place at the very top of the heap. He was, and remains, the gold standard. He might not be deity, but he was unquestionably royalty. After all, for 50 years he had the chair right next to the Count.

Hi Ronnie,
I don’t know if you have checked Dad’s new website, freddiegreenrhythm.com, as opposed to freddiegreen.org, if not, there are some vintage pictures, memorabilia and general information you might find interesting.

Ronnie, I really enjoyed your artical on my dad Freddie Green and his Stromberg…nicely done!

The interesting thing about the “…FLG” monogram carved into the mother-of-pearl marker at the 15th fret” as Ronnie Brooks discribes Freddie Green’s Stromberg 400, is that Stromberg got it wrong. Dad’s initials were ” FWG.” His middle name was William, which only adds a little more intrigue to Mr. Rhythm’s box. Freddie Green’s son and biographer:”Rhythm is My Beat: Jazz Guitar Great Freddie Green and the Count Basie Sound.” Alfred Al Green

Additional information from George Gruhn:
“I enjoyed reading your article and appreciate your comments about the shop.

Stromberg guitars are actually more rare than you thought. Although the serial numbers go up into the 640s, no Stromberg guitars have been found with a serial number below 300. It appears that the lower numbers may have been used on drums and banjos made by Charles Stromberg, but the guitars made by Elmer Stromberg started at about serial number 300, therefore the guitars are more scarce by 300 than you had thought. In addition, it should be noted that the guitars which truly made Stromberg famous are the ones made from 1940 onward, especially those with one diagonal top brace. The earlier guitars have three segment F holes, laminated arched pressed backs, and many have pressed tops with multiple braces. These early Stromberg guitars from the 1930s are nowhere near as good as the ones made from 1940 onward which feature single piece F holes and the one diagonal brace. This means that no more than 200 of the truly great Stromberg guitars were made.”

Sweet! I’m going to have to get to Nashville one of these days.