VOX brings out the big guns in the form of a miniature combo amp. This miniature tube amp is the newest addition to VOX’s Hand Wired series clocking in at 4 watts that it uses to belt all of your guitar playing out through the lone 12″ Celestion G12M Greenback speaker.

The control layout is as simple and straight forward as anyone could hope for with a master volume control and a set of controls designated “Top Boost” with a separate volume control, treble, and bass. Included in the Top Boost is a small switch labeled “hot” and “cool” that lets you switch between VOX’s signature Top Boost tone or a thick dose of gain that completely disregards the tone circuit like it doesn’t even exist. For added convenience you can use a footswitch to flip back and forth between the two settings.

The AC4HW1 pumps out 4 watts of RMS into 8 Ohms with its tube preamp that comes built with two 12AX7 tubes and one EL84 tube for power. At your disposal to take full advantage of these features are two 1/4″ input jacks labeled high and low.

For the sake of comparison let’s see how it looks against the older lines of Hand Wired VOX amps.

Aesthetically the Hand Wired line shares the same sense of style though even considering the AC15HW1 and AC15HW1X also have but one 12″ speaker (Celestion G12M Greenback and Celestion Alnico Blue respectively) they are housed in a more readily apparently larger enclosure with a mostly closed back. Already by that comparison it’s easy to infer that the AC4HW1 would sound like the AC15HW1 only more manageable for playing around in your bedroom. Having a lower wattage would make it easier to push the tubes into that sweet spot your looking for compared to a 15 watt power house that would get the whole street’s attention when cranked up. 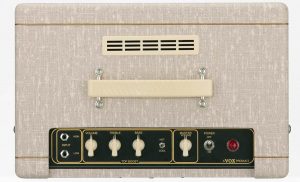 Beyond that the specs are very similar as the 15 watt Hand Wired amps use the same types of tubes, just more of them. You gain a few extra controls and inputs to the higher amps, but the core of what your after from a Hand Wired VOX has been accurately preserved. It looks to me like instead of trying to make everything bigger and better VOX has been striving to include more practicality while being true to their personality and with that the AC4HW1 tube amp is now ready to replace your night stand in your bedroom.