It seems like members of Kiss always seem to surface in the strangest circumstances. Granted this is substantially more down to earth and reasonable than Gene Simmons’ toilet paper escapade, but I still can’t help but to raise an eyebrow at the matter.

In a nutshell Gene Simmons had been put up to the task of starting a Led Zeppelin reunion. Don’t band members from the split up bands usually assume the role of pursuing a reunion? Or managers? Or record labels? I don’t know. The goal in mind isn’t unheard of nor is it unreasonable, but it just strikes me as weird that Gene Simmons is the guy at the helm of this ambitious quest.

One Has To Wonder How This All Began 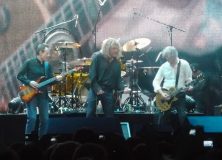 Just the other week, as you may have known, Led Zeppelin’s Celebration Day movie debuted which featured a recorded concert from a brief reunion of the band back in 2007 for their Ahmet Ertegun Tribute concert in London, England.  The path to the release of the concert had been graced with hurdles along the way and at one point it was flat out abandoned until somewhat recently when it was picked back up.

Just the other day on November 19th the movie premiered and it has since gotten the vast fan base restless for yet another reunion. The remaining members have been reluctant to give into the demand. So a concert promoter got in touch with Gene Simmons of all people, handed him several hundred million dollars, and told him to get Robert Plant and Jimmy Page to get back together again.

This is all fine and dandy, but I’m still not sure why they got Gene Simmons to take care of this. Does he have a reputation for hunting musicians down and convincing them to reunite? If he does then Google refuses to show me any resource confirming one way or another. I would say he probably has better things to do, but he did make Hello Kitty Toilet paper, so who knows?

And just what happened to those hundreds of millions of dollars? Does he have to give that back? Or was that just his fee for doing this? I can see how the conversation would go between Gene Simmons and Jimmy Page. “Oh, the hundreds of millions are mine. That’s what I charge to talk to people. You would get a percentage of revenue from concert performances and this complimentary roll of toilet paper.”

Even with hundreds of millions of dollars on his side in addition to royalties gained from their reunion the guitarist and the vocalist both declined the offer solidifying Led Zeppelin as a thing of the past with rare exceptions like Celebration Day. The remaining members of Led Zeppelin have always seemed to exercise a “know when to quit” mentality and have always been sparing in their reunions and I can’t really help but to wonder if it’s not for the best.

That isn’t to say I wouldn’t be supportive if they did reunite, but usually bands that rejoin decades after splitting up they retain a modicum of the aura that made them so famous and while Led Zeppelin defied odds and was universally well received for Celebration Day I think it would diminish the sincerity of what we do get from them. When Bonham died they quit while they were ahead and let the legacy take care of the rest which has proven to be more than enough on its own. And that point makes it all the stranger that they would get Gene Simmons to try and reunite them.