Getting More Definition From Your Dirty Guitar Tone

For when you absolutely gotta have that tone

In my previous evolution of a live rig series I discussed how, for any one of a number of reasons, the tone that sounds great in your bedroom might not work in a live context. While there may be a certain charm to watching someone dime the gain on their amp as a go-to formula for a good tone as anyone who’s ever sat in a guitar store anywhere will tell you, unless the practitioner is an experienced player who’s going for something specific the result is usually awful.

This isn’t just limited to the live arena.  When recording, it can be even more difficult to get a guitar tone to cut through a mix without major EQ shifts. Common advice in this area would be cutting the bass, boosting the mids and rolling back the gain – but if you’re really dead set on the tone that you have, this can be a major bummer. I’ve been employing a method with my laptop guitar rig that’s really helped with getting my guitar to cut through live or a studio mix  and the approach may be something that can help you as well.

In the case of the following audio example , I’m using my custom FnH guitar, a firewire Apogee Duet and an old Macbook pro for hardware.

In terms of software, I’m a big fan of Logic but it can be a bit of a memory hog in live use so when possible I use AU Lab. AU Lab is part of the Mac Developer’s Toolkit for a AU developers to test plug ins. Since it can run and route MIDI and live audio, play loops, run buses and record audio with VERY minimal CPU use, it’s a great tool for live use. All of the screenshots below are from AU Lab, but the process can be used on any DAW. If you’re running a PC, I’d recommend using the best hardware you can access and use the software with the lowest CPU use.

…to blend that tone

For cases where my distorted tone isn’t fully working, I’ll typically dial in a clean tone in parallel to add some definition to what I’m playing.

For example, here’s an audio link:

You can find the tab to this example here.

Let’s start with the routing:

The guitar signal is coming from the Duet into the audio 1 channel on the left.  I set up two sends on that channel with a distorted sound on one side and the clean sound on the other so I could dial in (and pan) the amount of clean sound I want to mix with the distorted tone.

For the dirty tone, I’ve put the Ignite Amps Tube screamer clone – (a great plug in that’s donation-ware so if you download it and like it make sure to cough up some cash for the developer!) – as the first item in the signal chain.: 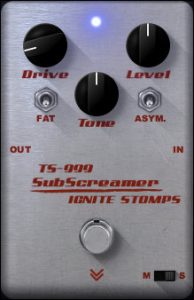 THe TS-999 also happens to play really nicely with Scuffham Amps S-Gear plug in. In terms of something that has the feel of an actual amp when you play it, as of this writing, the S-Gear blows every other software amp I’ve tried out of the water.  For the dirty side, I dig the Marshall / Park inspired Stealer amp.

Even with the pedal and the amp, I’m not going too crazy with gain here as I was going for the sound of a Marshall with the volume rolled off ever-so slightly. I’ve used a pretty healthy delay time instead of a verb, but brought the wet mix almost all the way down.

With the clean channel (using S-Gear’s Duke Model on the clean setting):

I pulled the delay out entirely and went with an outboard reverb. (The new S-Gear has some great sounding reverbs btw – this was just done because it was a very familiar signal chain for me). In some cases I would have completely changed the low/mid/highs of each amp so that each one stood out – but both amps sounded good together so I only made mild tweaks.

In other situations, I might go for more of a spread of the stereo sound in regards to panning, but for this use  I really wanted the clean tone there just for articulation and a little 3-D sound so it’s sitting just off the middle of the distortion. to give it a little direction in the mix.

I’ve run clean and dirty amps to clean up my POD tones but this approach is one that can be used with any hardware multi effects that allow multiple signal routes or amp simps at the same time.

Tone is very subjective.  While the end result I came up with may not be your cup of tea, the approach is one you may be able to use   either live or in the studio the next time you’re having a hard time getting the tones to pop out of the mix.

Thanks for the tip! I love Jan Akkerman’s playing btw! I used to play in an acoustic rock band years ago and a big part of my sound was splitting the acoustic out and the soundhole pick up. I used volume pedals to dial in distortion and delays to cover a lot of the overdubs I did. It’s a trick I got from seeing Jim Thomas of the Mermen (who had the greatest live tone I’ve ever heard!!!)

I’ve been building and using hybrid guitars for the exact same purpose for decades! One of my customers who usues the acoustic signal to give more definition to his distorted sound is Jan Akkerman. If you add a littlebit acoustic sound to a distorted sound, it does wonders to the dynamics and definition, even if it’s not recognized as such. From the other side of the perspective, adding a littlebit of slghtly distorted neck pickup sound to an acoustic sound gives it warmth and sustain. This can be easily achieved in software or on stage with separate amps for acoustic and electric sound.