Gibson Responds To The Third Degree After Federal Raid 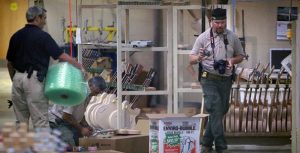 Yep, the company that brought us a significant portion of our very favorite guitars, which in turn brought us some of our favorite music, is suffering from a bit of governmental poking and prodding.

On Wednesday, federal agents paid a none too friendly visit to Gibson, raiding their factories in Nashville, and Memphis, and seizing pallets of wood, and guitars. According to Federal Agents, this is a criminal investigation.

It’s the second time this has happened to Gibson, the first being in 2009 when the Feds “borrowed” a pallet of wood and a few guitars from the guitar manufacturer in a similar raid.

The first time – the question was whether or not Gibson had been purchasing illegal woods from protected forests. If that had been the case, Gibson would be in some deep dookie right now.

The first raid also caught everyone off guard – mainly because Gibson’s CEO, Henry Juskiewicz, has been well known for encouraging others in his industry to use only sustainable woods for the manufacture of musical instruments.

In Wednesdays raid the government was seeking more proof (paperwork) that certain woods in the factory were legit. But they still walked out with a bunch of stuff.

Guess what – this deal isn’t limited to Gibson, or guitar manufacturers alone. You could be the lucky host to government officials if you own a vintage guitar that contains (or is suspected of containing) environmentally protected materials.

This will result in your guitar being unceremoniously removed from your possession and a $250 fine. It doesn’t matter if you had no idea that your guitar contained questionable materials.

Here is an almost 30 minute statement given by Gibson’s CEO, Henry Juskiewicz.