Enter The Next Era of The Gittler Guitar

Perhaps some of the readers here might remember the original Gittler guitar. It was was built out of the ambition of building a guitar with the absolute bare minimum requirements for a guitar to exist. So it all came down to a rod for a neck, frets, and a platform to house the electronics, pickups, and bridge.

To put into perspective the new Gittler guitar let’s take a brief moment to reflect on what started it all. Back in the 80s Allan Gittler wanted to make a guitar made of as little as possible and still function as well as any other guitar if not better just to see if it could be done. And sure enough he did. It saw great popularity when it was used in the Police’s music video for Synchronicity II. Only 60 were built so even with the attention it gained it didn’t have the numbers to stand the test of time. 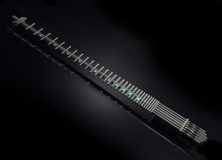 Now that we reside in the future the Gittler has made its return to continue the legacy that it began 30 years ago. By nature it resembles the original in the most fundamental ways (much like modern Stratocasters resemble the originals per the fundamental designs). The guitar is titanium all around from the cylindrical neck to the 31 board-free frets to the bridge, and what can only be described as the body.

The strings load in from the nut to the bridge to Gittler’s patented tuners. The fretboard also now features some sexy teal LED lights for fret markers. But those are minor details. Let’s get to the real thing that makes the Gittler guitar speak. The electronics. The new Gittler has this little E-box installed on the back where it houses the guitar’s own miracle generator. It’s no wider than the frets and has a standard 1/4” jack to plug into amps and a hexaphonic output to connect to just about any guitar synthesizer or into a computer provided it has compatible notation software.

The pickups are quite unique to the Gittler as well. Instead of having a couple of humbuckers each string has its own pickup. They’re magnetically shielded to prevent one pickup from hearing another string and are wound with copper and coated in wax. The sound of the Gittler guitar I think sounds surprisingly close to a hollow body guitar which is quite interesting since it has no body.

Update:  The new Gittler guitar is officially available for purchase.  They currently have two models – the classic model described above and a much more resilient special edition “Armed Forces” model – that can order one directly from GittlerInstruments.com.

The Future of Gittler

Gittler’s not only developing new guitars. They have two bass models in work one standard bass and one upright as well as a Gittler violin. Who isn’t curious to see how those will pan out? Currently they’ve only announced that these instruments are in development. It also raises curiosity as to what other instruments Gittler may try getting into. There are oceans of fretted instruments. Hell, could you imagine a 12-string Gittler? With the titanium neck it’s not like the string tension would be as great a concern as it is with a wooden neck. Or maybe a double neck Gittler. Wouldn’t that be cool? Of course these are all just hypothetical ideas, but then so was the Gittler guitar up until Allan Gittler made the dream a reality.