An Acoustic Style on Electric 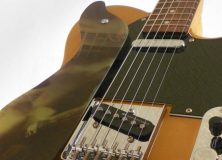 One of the things that makes the acoustic such a great stand-alone instrument is that its hollow body can be used as a percussive instrument to complement its harmonic and melodic capabilities as well. When you’re an acoustic guitarist you just grab your guitar and you’ve got the makings of a whole band in your lap. But what about those that want to get that same percussive playing style out of an electric? That’s where Gperc comes in. With Gperc you can get anything from those thick and gentle patting sounds to those quick and dense finger rolls like Michael Hedges or Andy McKee.

But just what is Gperc and how does it work? Read below and find out.

(Videos are at the bottom of the article)

Just What Gperc is and How it Works

Gperc is pretty simple. It’s a plate that attaches to your Strat or Tele.  It looks kind of like a second pick guard. It’s fixed just above the lowest strings and it’s right within range of your picking hand to tap, smack, roll, or lovingly swat. And with each of those loving pats a piezoelectric pickup picks up the vibrations in the plate giving you authentic bongos, djembes, and other percussive instrument sounds. But it doesn’t use any samples or percussion models of any kind. 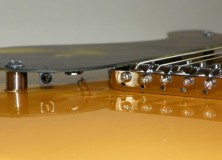 The plate can be tightened to your liking offering different sounds from different tensions. Plus you’ll notice there’s a little black dot near the center of the Gperc. That’s actually a shaker pad. Rubbing your hand on it will get a more modest shaker sound adding even more percussive variety to the deal.

An initial concern I’d had, and I’m sure many others would wonder, is where and how is the sound emitted? The videos posted show the Gperc in use with clean guitars, but what if you want to kick on some distortion or effects? Are you suddenly going to play with heavy metal bongos?

The answer to that question is no. And it’s because of this that I think the true innovative might of Gperc really comes to light.

Gperc comes with its own separate output. That means that you can kick on your Tube Screamer without altering the percussion and maybe even run the Gperc through a delay and reverb effect. With options like this surfacing the versatility of the electric guitar has expanded way more than I think it has in a long time. 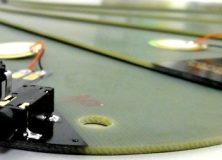 The Gperc’s origin amused me in its purity. Its conception was completely inadvertent as a lot of great ideas often were. Inventor Frederic Riedel was simply looking for an attachment that would give his hand a more comfortable resting position. As he was playing he’d noticed the pad began making a percussive sound much like maracas. Then the light bulb clicked on.

He began toying with other materials and hearing how the sound changed and before long the Gperc was in development. In fact the Gperc is still in development. You can swing by ulule.com/gperc to find out more and even pitch a few bucks over to Riedel to help fund his project. Depending on the generosity of your donation he offers some equally generous incentives.

This thing is too cool! I’ve been to their website and Facebook page and there are more videos. Pretty slick idea but looks like it would be tough to master while you play. They are doing lots of percussion in the videos, but not much playing. If they could get Andy (McKee) to try that out, they might have something.