Guitar Audio Interfaces On A Budget

Welcome to The World of Interfaces

I’m gonna say it plainly. Recording is awesome. The age we live in is even better for recording since so much hardware is built to give us the power to record as much as we want in as great of quality as possible from the comforts of our own homes. Unfortunately we don’t all have the fiscal resources to get every last piece of hardware we want, but thankfully we don’t need everything under the sun to get the job done, so here’s my top 5 best audio interfaces for a budget. 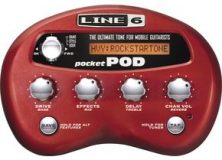 Line 6’s pocket sized POD is a handy trinket in and of itself. Small enough to slip in your pocket and little bigger than the palm of your hand, the Pocket POD has 16 effects, 32 amps and 16 cabinet models. Line 6 has a solid reputation for their quality in effects modeling of which everything in this is based around a long laundry list of amps, effects, and guitarists to ease the curve of getting certain sounds. Plus Line 6 always tends to cram as much into any given piece of hardware they produce so at $130 the Pocket POD has bang for buck on its side. 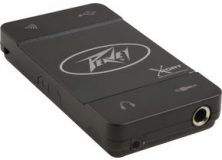 The Peavey Xport is the obligatory bear minimum interface on this list. At $60 you’re setting yourself up to get what’s needed from an interface. It’s a piece of hardware that lets you connect a guitar to a computer without any effects or any real bells and whistles. It does come with the ReValver modeling software to give you some tone tweaking capabilities as well as Reaper for recording, but the hardware itself only has ports to plug in a guitar and a USB cable. It’s best for people that want to keep it straight forward and simple. Kiss style, you know?

For what it’s worth Peavey also makes an interface for the iPhone – the Ampkit interface. Jameson had reviewed one some time ago. They run about $30 and are handy if you’re looking for a damn inexpensive alternative and you have an iPhone. 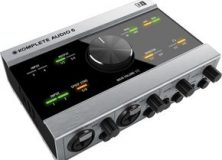 Native Instruments’ own audio interface, the Komplete Audio 6 is in the territory for those with a bit looser of an interpretation of the word “budget”. For those looking for tier 2 in budget devices. At $230 it grants you two inputs for both microphones and guitars on the front alone let alone the two extra inputs in the back, the MIDI in and out, phantom power, it’s USB powered, and it has plenty of knobs to turn because let’s face it. Turning knobs is fun. That’s all I live for anyway.

When you’re done turning the knobs on the interface you can turn the digital knobs in the included Komplete Elements software for instruments and effects, Cubase LE 5, and Tracktor LE 2. In short the interface is solid and the software it comes with carries weight. 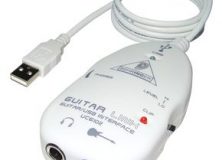 Ok, when we start throwing the B word around, no one knows budget like Behringer whose sole existence is seemingly to offer the most accessible alternative to anything out there. It’s another bear minimum model offering a place to plug in guitars and headphones and has the USB cable permanently attached to it and while it doesn’t quite have the sexiness to its aesthetic as other interfaces have it will do what you need it to do. Connect your guitar to your computer so you can record. It’s not going to get you the sound of a pro studio, but if all you want is to record something for a show and tell it’ll do the trick. Plus it comes with Audacity and a Behringer version of Guitar Combos amp and effect modeling software. 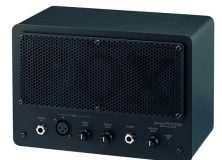 I’m mentioning the JamVOX simply because it’s viable if you can get your hands on one. Unfortunately VOX discontinued the model so now all we have is the mythic lore left in the wake of the interface’s legacy. From what I’ve extrapolated from reading the best explanation I’ve found is it was a casualty when Korg and VOX split up, but that can be reduced to rumor and hearsay so you can decide how much stock you want to put in that explanation. Given the reputation it had established it would surprise me to hear that it suffered from issues of supply and demand.

The JamVOX offered 19 amp models and 54 effects, but the thing that really set it apart from other alternatives is the built in speaker for monitoring. Sometimes headphones kinda get in the way of monitoring and if nothing else it will help preserve your hearing. If you want headphones you can use them, but you don’t need to jump through hoops to plug your computer speakers into the interface just so you can monitor through some speakers. With this interface you can record guitar and bass and it has an XLR input for microphones as well. Big plus for both vocals and micing amps.

This is one worth skulking around on eBay into the wee hours of the night. I’ve seen them running on average about $150 to $200 which is a bit more than it cost through retailers, but still a reasonable price.