Guitar Meditation – A Discipline in Focus

The Subtle Art of Paying Attention

You ever find yourself watching a guitarist and asking yourself “how in the Sam hell is he/she able to do that?” And often it’s a legitimate question. Some guitarists are just plain beyond good, whether you like them or not. Of course whenever any of us ask how we get the same response every time. 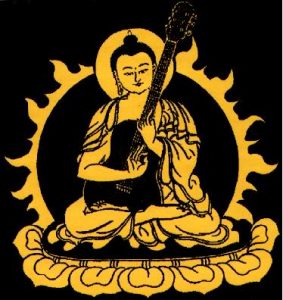 Ok… who hasn’t heard that one before? Who hasn’t had the luxury of sitting down with a metronome cranked to such blistering speeds as 60 bpm whilst running through scales. However there is one crucial factor that tends to get brushed over along the way under the presumption that it’s just understood. Focus.

Some people seem to have been born with the miraculous ability to become enveloped in whatever they’re doing at a given time, and yet for others focusing is a skill to develop just like playing the guitar. In the 21st century focusing is scabrous enough given the constant pounding we take from the world around us. Our precious brain real estate can get congested so easily leaving us with little mental power to think for ourselves for so much as a second as a side effect.

The philosophy I am imbuing this article with is not unlike Buddhist meditative practices. Now I’m not going to go and tell you to twist into a pretzel and become a contortionist. I know you’ve been meaning to practice that little ambition of yours for a while now, but for all intents and purposes let’s leave that one out of the equation for a minute. It’s all about focusing on what you’re doing in a given moment and visualizing your goal.

Focusing on What You are Doing

Actually it’s that simple to say what to do, but next time you’re playing guitar see how long it takes before a thought pops in your head that isn’t specifically focused on what you’re playing. And I mean anything. The solution to this is deceptively simple though.

All you have to do is pay attention to when you’re paying attention. Absorb the feeling of the strings under your fingers as they move around on the fretboard. Focus on the strumming pattern of your picking hand. Really take in every aspect of what you’re doing at the moment and when you notice that these things slip your mind and you start thinking about dinner or some other random thought pause for a second and start over. I should mention this is for when you’re practicing. Not performing. People might not understand if you do this live.

When you’re practicing you should be doing the opposite of rushing. When you lose your train of thought, there’s no need to get frustrated, or hastily speed up your metronome so you feel like you’re making progress. Each time you notice your focus slipping you get better at recognizing it and eventually you won’t have to pause.

Real progress in this area takes self discipline. It’s easiest when you remove everything that can be a potential distraction from the equation. What constitutes as a distraction is different for everyone, but there is a one-size-fits-all rule of thumb. The more you want something the more of that thing you should surround yourself with. That’s why recovering alcoholics don’t hang out in bars. It conflicts with the goal.

Practicing the guitar is the same way. When you surround yourself with non-guitar related things you welcome those into your mind whilst you play. There isn’t anything inherently wrong with that, so don’t go throwing out your movie collection just yet.

Just know that you welcome into your mind what you surround yourself with.  These variables can either make the skill of focusing easier or more challenging.

Visualization is among the most peculiar of skills (if that’s the proper word) if you ask me. Simply thinking about where you want to get yourself actually helps get you there. Of course there’s no substitute for actually doing what you need to accomplish your goals, but visualizing the end result helps better define in your mind what you’re out to do. It gives it shape. Makes it more real than just some hypothetical possibility should the stars align just right.

One thing that goes along well with visualization is training your mind to see the music around you. Even in the things that aren’t inherently musical. For example. Take a phone book and turn the numbers into tablature. Another example. Today I guessed my mother would call/text me 8 times. The total came out to 13. Turn that into a 13/8 time signature and start writing in that. Boom. That easy.

The world around us is telling us all we need to know what to write. We just have to focus and pay attention and you can literally turn anything into music.