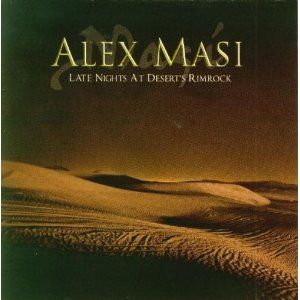 Hey Guitar-Muse readers! This session of Guitar Notes from the Underground looks at Alex Masi and his solo on “Disembodied in Mojave” from his Late Nights at Desert’s Rimrock CD.

While Alex is known amongst shred guitar aficionados, he hasn’t broken through to the mainstream guitar audience.  Which is a shame -because Alex not only incorporates distinctive melodic and rhythmic elements into his soloing, but also stands toe to toe with any speed player out there.  I’ve chosen to examine “Disembodied in Mojave” as it’s a great masterclass in how to use a scale-based approach while creating an exciting and dynamic solo.

It starts with a riff

The solo of the song is played over the following riff.

The riff (and much of Alex’s solo) is based largely on A Phrygian Major A, Bb, C#, D, E, F, G (aka altered Phrygian, Phrygian dominant, or the 5th mode of harmonic minor).   The two 1/2 steps in the first beat phrase (D/C#, Bb/A), followed by the 16th note pattern, gives the backing track a nice middle-eastern meets hard rock flavor to play over.

The opening phrase at (2:32) of the video has some great phrasing. The slides are reminiscent of something you might hear a sarode (an Indian fretless string instrument) player play.

The second bar of this phrase has some very interesting timing. By incorporating a three-note and a four-note phrase into groups of five, Alex draws attention away from the rhythm and gives the phrase a rhythmic push and pull that propels the solo in a subtle, yet compelling way.

If you have trouble reading the divisions of 5, think of it as a really relaxed sixteenth note feel. This rhythmic feel of jumping between straight metronomic sixteenth notes and groups of 5, 6 and 7 (producing a sound of “freer” time) is a key component of Alex’s style (and one that’s worth exploring!)

The melodic skip down from G to C# is unexpected and sitting on the C# creates a tension that’s exploited in the following phrase.

The three-fret slides that are incorporated in the first part of this phrase utilize notes from the A Phrygian Minor scale, but also allude to a diminished sound that Alex is quite fond of. The two-note sliding figure is moved to a two-note-per-sting pattern pattern that builds tension up to the high e on the 24th fret. While there’s a real logic to how Alex is executing this contrast, the solo strikes me as intuitive and improvised and the result of countless hours of working through different ways of working through a scale. This is a great example of making music from a scale-based pattern.

It’s difficult to hear at tempo, but careful listening reveals that his vibrato on the high e string is wide enough that it’s actually a ½ step bend in time. This is followed by a speedy alternate picked sextuplet run.

Note: The slide notated at the 14th fret is more of a general slide down than the strings instead of something that is specifically tied to pitch.

The string skipping lick and intervallic work at 2:46 is one of the coolest parts of the solo for me. Alex may be using hybrid picking for the notes on the high e string, but I’m guessing it’s all flat picked.

Making a position shift in the second bar of this phrase to the 7th fret makes a difficult lick slightly easier to play.

This is followed by a typically Masi style sequence. In a promo shoot for Ernie Ball (Alex is an endorsee and clinician for the company), Alex mentioned that he studied with Shawn Lane and the timing of the first bar ( again shifting from sixteenth notes to divisions of 5 and 6) is a classic Lane move.

The sequence morphs from an A pentatonic minor approach (with an added F natural) into a diminished idea in the second measure. This shift from a pentatonic into diminished is also a signature move for Alex and a great way to bring “out” sounds into a familiar area of your playing.

This is followed by a descent to A in the first bar. In addition to the string skips employed here, notice how he uses the same A Phrygian Major scale alluded to earlier.

The second bar of this excerpt employs shifting a 2-string arpeggio shape onto the A and B strings. This is followed by some diminished phrasing on beats 2 and 3.

Note: I recommend shifting position for the first note of beat 4 in this bar. If you slow down the recording you’ll hear a slight pause when Alex does this in the solo.

Alex clearly uses a lot of control in contouring his lines. Even when he incorporates something like a straight 16th note sequence into his playing (this bit comes from 2:56 or so), he changes the note order to make the phrase a little more unpredictable.

This is followed by a blazing D natural minor descent with a chromatic passing tone on the B string.

From a technical perspective, the speed at which Alex pulls these licks off at will be the most obvious challenge to getting these lines down. As was the case in the Vinnie Vincent lesson, the important thing to focus on is fluidity instead of speed. Practice the lick slowly and gradually build it up to tempo. Going too fast, too quickly will tense your hands up and make it harder to play the lick.

In my opinion, the larger (through perhaps less obvious) challenge will be really nailing the timing on these phrases. But as the rhythmic push and pull of Alex’s phrasing makes for unique and exciting playing, they’re also the element to incorporate the most effort into.

If you like this solo, you may want to check out some of Alex’s more recent recordings such as Late Nights At Desert’s Rimrock, 1900 Hard Times (with MCM) or his 2010 release Theory of Everything.

We have more cool players (and more cool licks) in the pipeline for this series, so stay tuned!