Guitar Notes From The Underground: eX-Girl

A Lesson In Odd Time Riff Transformation With eX-Girl 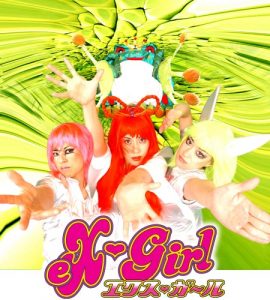 A bold surealisttic sonic canvas, Back to the Mono Kero! was colored with strange vocal harmonies over pop, rock and avante influence.  Despite the strong recording and championing of people like Mike Patton (who released it on his Ipecac Recordings label in the U.S.), eX-Girl never really got the attention that they deserved.

While many of the Guitars Notes From The Underground posts have featured very technical players, this time I wanted to feature an act that showcases some serious right brain musical creativity in lieu of speed driven chops.

In this lesson, I’ll talk about a few compositional devices from the first track off their Back to the Mono Kero! release, “Waving Scientist at Frog King” that can add some really sonic spice to your own tunes.

The introduction begins with an a capella performance I’ve arranged for three guitars that produces some harmonies that you won’t be hearing on GLEE anytime soon!  Here are the first 14 seconds (the second repeat is largely the same with a few small alterations).

That’s an ear twister!  I haven’t included a key signature because even though you could analyze the chordal structure of the introduction, I don’t think that analysis will get you any closer to understanding the nuances of the song. For example, the first chord produced by the voices could be analyzed as an Ab5 (add b9)/Eb but I don’t think the trio are thinking of it in those terms.  My guess is that the middle part is the original melody and the other two parts were written around it in an imitative and intuitive way.

I recommend checking out how the different lines work together. Closer inspection reveals some imitative parts in the piece where the first two measures in the second voice become measures three and four in the third voice. While using voice leading like this might get you an F in any university level Counterpoint 101 class, this is a great example of how to adapt techniques from other styles to fit your own musical goals.

Don’t just transcribe guitar parts to songs you like!! Learning other instrumental and vocal parts of songs can expose you to cool melodies, harmonies and ways to finger them on the instrument!

After the a capella introduction, we come to a short repeating vocal figure (called an ostinato) that spells out a Bb5 (add 7) (Do you see a trend here?)

The 5/4 figure might look intimidating, but the rhythmic figure breaks down into a group of three beats and two beats. (If you have trouble reading the rhythm, try using the following phoenetic device and saying, “Trip-a-let One Two Trip-a-let One” while tapping your foot in time.)

I’ve written out each voice on a separate string in the event you wanted to play it with one guitar.  Just make sure to mute the B string if you’re playing all 3 voices at once.

While this ostinato is playing, the guitar and bass play a unison riff while the drums mark ¼ notes.

Note the use of space in the guitar and bass riff. Since the vocal melody line is static playing just four notes over two bars of 5/4 adds another neat twist of the ear.

One way to superimpose ideas over each other is to just use space!

In terms of scales – the first part of the riff implies an A Mixolydian (D Major) feel but the harmonization adds in a b9 and a b5. Putting it all together gives us a nine-note scale with a lot of ½ step intervals. A, Bb, B, C#, D, Eb, E, F# G.

The second half of the riff is more active rhythmically and melodically.

In this part of the riff, the four note idea is expanded into a two bar phrase. Adding the C Natural now gives us ten of the twelve notes of the chromatic scale (A, Bb, B, C, C#, D, Eb, E, F# G) to pull from. The C pitch also pulls the riff from an A Mixolydian sound to an A minor-ish sound at the end of bar two. It adds some ambiguity to the overall tonality and creates an unsettled sound in a very unforced manner.

This riff ties all the things I mentioned above together.

Here’s a short list of things I love about the verse:

1. The opening four notes of the previous riff sets up a new 4 bar 4/4 phrase. It’s a great way to recycle an idea into something new!
2. “Space – the final frontier” Note how the riff adapts the use of space from bar two of the riff and adds two notes at the end of bar four that lead perfectly back to the beginning of the measure.
3. Cool chromaticism! Is it A Mixolydian? (Bar 1) A Phrygian? (Bar 3) or A natural minor (bar 4)? All of the above? None of the above? WHO CARES! It sounds COOL.
4. Check out the drum part! Going off the snare hits, the drum part superimposes a 3-2-3 rhythm over the 4/4 measure which adds to the off kilter feel. It’s minimal drums and maximum effect and it works perfectly with the riff.

Finally, let’s look at the chorus of the tune.

The guitar part is a series of triads: F major, A minor, C minor and Ab major.

If you’re in a writing rut and find yourself using the same bass motion in 3rds (like E to G or C to E) over and over again – try alternating the quality of the chords with the bass motion.

There’s a lot more to be gained from learning the rest of the tune (especially the Queen meets alternative chemistry section starting at 2:07 or so!) but I hope this brief introduction has given you some ideas to use in your own tunes!

If this lesson intrigues you I highly recommend checking out all of Back to The Mono-Kero! for some adventurous tracks like “Aji Fri ” and “Cucumber Surrender” and their super fun cover of “Pop Muzik”!

Thanks John! I like them as well and I’m glad you liked the lesson!

Great lesson and a huge thanks for clueing me in to Ex-Girl – they are fantastic!