Hollow Body Basses Are Back

An Old Sound Returns for a New Audience

In the early 60s, the electric bass was just catching on and Fender all but owned the new solid-body market. Then came the British invasion—and with it, a wave of Hofner, Epiphone, Framus and other short-scale, hollow-body four-strings aimed as much toward guitarists as bassists. Even though the hollow fad was relatively short-lived and solid basses quickly regained prominence, the vibey, unmistakable hollow-body tone is making a comeback and gaining new fans. Check out these new versions of “old favorites.”

Prices are not manufacturer’s list, but are typical online and store prices. 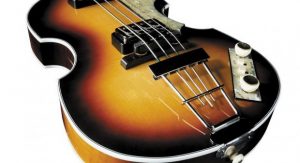 When the Beatles burst onto the scene, Paul McCartney’s violin-shaped Hofner turned heads—and ears—and quickly became the sound everybody wanted. And nothing makes that sound like the original German-made, 500/1 Violin Bass or single-cutaway 500/2 Club Bass (which explains why Sir Paul still tours with his 500/1).

New or used, one of these short-scale, virtually weightless beauties will set you back close to $3,000. However, Hofner has recently come out with two Asian-made lines, the Contemporary (CT) series (around $900) and the Ignition series (also sold as the “Icon,” around $500), that offer almost the same look, sound and weight of the originals. Feedback on the CT has been generally positive; the Ignition’s cheaper hardware and electronics haven’t earned great reviews.

Besides being played by The Monkees, early Gretsch basses barely made a splash. But their new models are definitely worth a look, starting with the Electromatic 5442 ($900). Two FilterTron pickups, 30¼” scale and very comfortable neck deliver both classic 60s “whump” and contemporary presence. It’s easy to play with either fingers or a pick (a must for the 60s sound) and comes in cherry or black. The single-cutaway Broadkaster 6119B, ($1,749) and Electrotone 6073 ($2,049) deliver similar tone and short scale length with upgraded features.

If you prefer a 34” scale, the Electromatic 5440 ($900) and over-the-top White Falcon bass (around $3,300) offer more string length, sustain and growl—but at the loss of some of the traditional hollow-body sound. Unless you can’t live without the long scale, the 5442 delivers the best bang (and vintage tone). 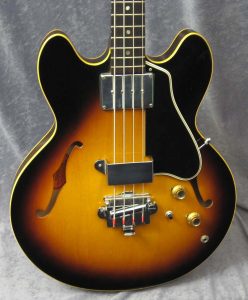 The 335-style Epiphone Rivoli and Gibson EB-2 were popular with many British bands (and Americans going for the British sound). Now, Gibson has introduced an updated version as the new Midtown bass ($1,299) with a chambered mahogany body and maple top, 34” scale and two humbuckers. It’s a tough choice between cherry, sunburst or black. A few Pelham blue Midtowns are still available, but according to Gibson, the color has been discontinued.

Two Epiphone models, the Allan Woody Rumblekat ($399) and Beatles inspired Viola ($299), come with a 30¼” scale, two mini-humbucking pickups and Hofner-style control panel. Both play easily (especially with a pick) and deliver the fat low end and shorter sustain you expect from a hollow instrument.

Epiphone’s Jack Cassidy model ($699) is a slightly different animal. In production since 1998, this goldtop (also available in black) features one low-impedance pickup and a three-position Varitone switch for an interesting, though somewhat limited, tone range. The string spacing and flat radius on the long-scale neck give it a different feel from either typical Fender-style basses or from its short-scale Epi cousins.

There are a few other brands out there, including two Ibanez Artcore models ($499), the Lakland Skyline ($1,499), and the versatile Godin A4 Ultra ($1,150), which features a Lace Sensor pickup, piezo transducers and a 13-pin jack to utilize the Roland G3 synth. Also, don’t turn your nose up at a vintage Harmony, Kay, Silvertone or Danelectro, if you can find one. And be sure to try out something with flatwound strings, since to many, flatwounds define the hollow-body sound.

Whether you want to expand your sonic palette or put a new stamp on your band’s sound and look, a hollow-body bass will make a cool addition to your rig. Who knows … it might even take you back in time.

The Mosrite Celebrity is a fantastic hollow body bass. Hard to find, but certainly worth mentioning as one of the best.

Nice article, Ronnie. I used to have a Hofner, hollow body, double cutaway, 4 string, in red sunburst. I don’t remember the name of it but it was sweet!