How the Guitar Made Me a Better Man

It doesn’t seem like that long ago that I was sitting in my bedroom struggling to get my hand around an F Major barre chord.

Investing time and effort into this instrument has paid off in unexpected ways over the years. Somewhere along the way, somewhere between scratching my head over the modes and playing around with the Minor Pentatonic scale, I’ve learned some important life lessons that I never expected to learn from a chunk of wood with wires on it.

1. Sometimes In Life It’s Not All About You. 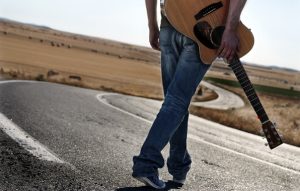 Success as a guitarist often depends on listening, thinking about what’s good for the song instead of what’s good for your ego, and ultimately working to help other musicians sound good.

Most of the time, the guitar plays an accompanying role. At most, solos are only 10% of the story of what it means to be a guitarist. And that continues to be true long after you unplug for the night: in so many life situations, you’ll find life goes smoothest when you make somebody else look, feel, or sound amazing—to help other people achieve their wants and needs. This holds true whether you’re playing the role of parent, teacher, boss, or employee.

Focus only on your own ambitions; insert yourself into everything needlessly, make every conversation about you… and you’ll get passed over for the job promotion. You’ll get kicked out of the band.

Sometimes the best way to achieve everything you want is to focus on what somebody else wants.

The more you put out intelligent effort, the more this instrument gives back to you.

There have been plenty of moments when I’ve felt bored by exercises, stumped by new concepts, and impatient with challenging songs.

I’m not just talking about the Ghost of Practice Sessions Past here either; I mean I’ve felt frustrated and disoriented today. Believe me, I wasn’t having the time of my life while I was drilling myself on nonchord tones in the Dorian mode earlier.

But today, like so many days, I take a deep breath and remind myself that guitarists get good by chasing the things they’re bad at. They hear their own mistakes, humbly accept that those mistakes happened, and then they do the work to make it right.

The best players are the ones who are patient enough with their own shortcomings to keep at it until finally, like dawn breaking over the horizon, they finally nail it. The new concept clicks into place. Ahh, clarity.

And of course that applies equally well outside the practice room. If there’s something you want to accomplish, but it turns out to be tough, the task sits on your shoulders to keep your resolve strong, focus on identifying exactly what the trouble is, and keep pushing. In other words: be tougher than the challenges are.

Hit a wrong note, onstage or in life, and you can always learn something from the mistake. At the very least, you’ll learn where your weaknesses are. And once you know what the weakness is, you can work to strengthen it.

Repeating these little corrections day after day adds up fast. The distance from where you sit now to the top of Everest is made of individual footsteps. Advance a little every day, learn a little something, and in no time you’ll be looking down on the clouds.