How To Become Better At “Jamming” And Writing With The Band

How To Become Better At “Jamming” On Guitar 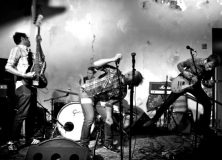 Do you ever find yourself jamming with your band, or a couple of friends – and you feel lost? Does the inspiration die down after you’ve played the same lick 300 times and you’ve exhausted any solo ideas you have for the jam?

Would you like at least some of your jams to produce usable song ideas?

This stuff isn’t just for beginners. I’ve played with some really excellent musicians that have no idea how to jam. You start a riff and they just look at you funny, or they play some half assed canned part that doesn’t even remotely inspire you.

Jamming is possibly one of the most fun things you can do with your guitar – and it should be rewarding.

Also a good jam will frequently turn into a great song, so it’s a really valuable practice.

If you find yourself stuck in stale-ville while jamming,  or just not knowing what to do, follow these tips – they should help you out.

Stuff you can do alone to prepare

Put on a cool song that you like, but haven’t learned yet. Don’t worry if you can’t play it right – this is jamming, you don’t have to do anything – there are no rules.

Just jam with the song like you would with a band. Doing this will improve your ear, first of all. You’ll be exercising whatever part of the brain handles that “hear and respond” thing you do while you’re messing around with others.

Play what you think sounds good – but try not to play what the other guitarist in the recording is playing. This works especially well if you can try it with songs you have never even heard before.

When I was about to join the band I am currently in, I was warming up this very way – a few days before we all got together. I put on an album – of all things – Lady Gaga. I’d never heard the whole album before and it was a really amazing exercise for me. Gaga is totally not my style – but it didn’t matter. In fact, that made the experience more beneficial for me.

Obviously this will help you learn your way around the fret-board, and become familiar with which scales go well with various chord progressions. It’ll help you in many other ways as well.

There are plenty of resources online to get backing tracks for guitar.

And tons more. Just google it. Find some tracks that work for you.

Stuff you can do while jamming with others

Nail down the riff before you start soloing.

So the drummer and the bass player are laying down a solid beat and bottom end – and now it’s the moment where you’re supposed to jump in. Resist the temptation to immediately start soloing. Pay attention to the riff, and jam on that for awhile. Try some “on the fly” improvisations – but make sure you’ve got a riff that works.

Don’t just play the same riff over and over

I’m not saying to write a bridge and a chorus on the spot – but yes, think like that. Come up with two or 3 parts. Let your creativity take over. There’s something really thrilling about that moment where you know you’re about to change up the jam a little. Will you go from E to A and play the same riff? Will you try some longer sustained chords? All of these decisions are made in seconds – and here’s where you’ll see the work pay off that you did all by yourself – jamming with background tracks. It really helps you think on your feet.

Make sure you’re listening to what the rest of the band is doing.

Try to compliment their sound. There’s nothing wrong with you not diving in as soon as the rest of the band starts playing.

Also, pay close attention to your creativity. It’s hard to be suddenly creative, but if you can develop this skill – you’ll be unstoppable.

Is it ok to stop the other guys if you have an idea?

I say yes, absolutely. If it’s a good enough groove they’ll get back into it. If you have an idea for the jam / budding song, stop everyone and show them – then hop back into it. You’ll know when an idea works, an electric shock goes around the band and you can see everyone smiling.

Don’t forget – it could be a song!

When it’s all said and done, if you liked what you heard – don’t let the band move on to something else until you’ve solidified what you came up with!

Whether you write down the riff, record it with your cell phone or just try to remember it (not recommended), or decide to work on making it into a song on the spot, don’t let it get forgotten. I shudder to think how many great songs have been lost because the band went on to work on their set list after a great jam!

Hi Tim, thank you for linking to my site. I’m glad you found it useful. Please don’t hesitate to make any suggestions or mention what you’d like to see on the site.