How To Choose A Good Guitar Repairman Or Luthier

What is the most important quality in a guitar repair guy? 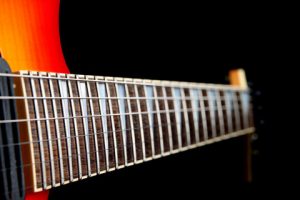 Depending on your skill level, there are things you can do to repair your guitar, other things you should at least be careful with, and probably still more things that you shouldn’t touch – like the truss rod – if you’re not very familiar with how it works.

At times like this, you’re forced to take your favorite instrument – one you’re likely pretty attached to – out into the world to have some guy you don’t even know adjust, tweak, and fix it.

This is scary. Shit happens. Even the most skilled luthier can make a mistake, and I know at least for me it’s pretty stressful when I hand my baby over the counter and wait a few days or a week to see what the result will be.

So when I relocated to a new city, one of the first things on my agenda was to find a guy to work on my guitars.

The guy who didn’t care

The first guy – from a large guitar chain that will remain un-named, was a pretty nice guy. He was really busy though, and didn’t really seem to take the time to understand my issue. As I feared – my guitar came back to me and the adjustments didn’t really address my issues.

In fact, the thing was a pain to play after that. So I went out in search of another repair guy.

The guy who did care

That’s when I met Justin. I know – this is starting to sound like a bromance – but whatever – I love my guitars. I sure as hell better at least like the guy who is going to be poking, prodding, and twisting them – and more importantly – the guy who has to be understanding my needs.

The first thing that struck me about Justin was (oh crap) he was really busy. I had to wait to talk to him – but this isn’t a bad thing – it’s all about how the guy handles being busy.

When it was my turn to talk to Justin – it was like he somehow was in a bubble where he didn’t even know how busy he was. He wasn’t hurried, and he made me feel like I was his primary focus for the 15 minutes we spent together.

I liked this guy. He took the time to listen carefully to my issues, look at the guitar for about 10 minutes while I was still there, and one comment he made that sold me:

“I’m really concerned about the neck on this one.”

I very happily thought – “You’re concerned? About the neck on my guitar?”

The way he chose to word that sentence was magic to me – because I was concerned too. If this guy even remotely cared about my instrument, then he was the guy to work on my stuff.

He went on to show me what his concerns were, and explained everything about what he was going to do, and his best guess on the price.

End of story – the guitar needed a new neck, it was warped – that’s something either the first guy missed, or he tried to tweak around the problem. It’s also why the guitar didn’t play any better for me after he adjusted it.

Justin didn’t benefit much by doing the right thing. In fact for the money I paid him, and considering that he had to yank the neck off, send it out for a new (warranty) neck, spend time on the phone with G&L, he made less money off me than if he had pretended the neck was fine and tried to adjust it, like the first guy.

Even if your repair guy doesn’t care about you in particular, if he cares about the instruments – and I’m assuming that this caring comes out of a love for the instrument – you’re going to feel like the guitar is in good hands. That’s a lot of peace of mind.

What about the cranky bastard behind the counter?

We’ve all met him. He might correct your terminology or make you slow down and tell him about your issue in a specific order that makes sense to him. He might seem agitated that you don’t understand your issue very well.

While this guy can be a bit abrasive, he’s a lot safer than the guy who doesn’t take the time to actually understand why you’re standing there in front of him.

This grumpy dude most often does care – that’s why he’s grumpy. He just isn’t dealing with the human interaction as well as my guy Justin does. That’s just social skills – don’t let that scare you off.

The fact that he angrily corrects you, or makes you explain your issue his way indicates clearly that he cares and wants to get the job done right. He’s probably had to deal with people who don’t know what they want, or who are mislead about what will actually solve their problem. He’s probably had experiences where he did the right thing, and the customer wasn’t happy because they thought the right thing was something else entirely.

You’re looking for the guy who cares

That’s pretty much it. Either way it comes across, you’ve got to look for clues that he cares about what he is doing – not just bagging and tagging your guitar so he can get to lunch.

Here are some clues to look for. Think about your guitar repair guy and ask yourself these questions:

All of these things indicate to you that he is into what he’s doing, and if I had to chose one quality that would be the one I’d stick with. If he really cares about what he is doing, he’s taken the time to educate himself, and he will make good decisions and take care of your guitar.

Easiest way I think is find a reputable luthier and forget about the music store repair guys. It’ll cost you a but more but they will do a great job.