How To Get Discovered – Or Struck By Lightning, Whichever Comes First

The Bottom Line: It Might Be Easier to Win the Lottery

Guitar-Muse.com receives emails frequently from readers asking, “How do I get discovered?” It seems like a fair question, since there isn’t a definitive guide out there. Unfortunately, the simplest, most straightforward answer is: There’s not one correct answer—certainly not a guaranteed method for being seen by the right people.

Acts do get discovered in different ways and different places. But the truth is that your chances of getting that lucky break are infinitesimal. I’ve actually read a scientific study showing that a performer has a greater mathematical likelihood of being struck by lightning than of becoming a star. Ouch!

With that in mind, here are some suggestions based on what I’ve learned over thirty years in the music business. I hope my experience and perspective are helpful to you.

Be sure you’re doing this because you love music, and not because you want to be discovered. Playing music is a joy and a challenge, and the creative process is tremendously fulfilling as long as you love what you’re doing. Writing, arranging and performing songs can be a real high, and touring and gigging with your buddies can be the most fun you’ll ever have—unless you’re so intent on “making it” that you fail to enjoy the moment. It’s OK to focus on being excellent, but have a good time and be nice to people along the way. If you enjoy the ride, it will make the destination—wherever you end up—that much more enjoyable.

Great songs make a bigger splash—and more money—than great musicians. I say this as someone who has played on hundreds of sessions and live gigs, jingles, TV shows and commercials. Sessions pay well, but a hit song can continue to generate revenue for years. It can be re-recorded or be licensed for use in a film, TV show or commercial and open the money spigot all over again. There are tons of great guitarists out there but if your playing is attached to even one unforgettable song, you’ll get more attention.

3. Play and Sing Your Songs Better than Anyone Else

You see artists all the time who play terribly. But they play their songs better than anyone else does because of their originality and emotion. Even if you’re not a great player, if your playing and your songs are a good match, you’re more likely to be noticed.

What if you’re a really good player, trying to land a better gig? Can you read chord charts, number charts and notes? Do you have top-notch, quiet gear? Do you have experience playing several different styles and venues? Are you easy to get along with—a team player? Are you in good shape, healthy and look good on stage? If you can’t answer “yes” to all these, somebody else can … and they’ll probably get that gig you want. It’s a business, and the most qualified player is most likely to be hired.

4. Go Where the Music Business Is

If you want to be discovered, it’s pointless to be the best guitar player anywhere that isn’t Los Angeles, New York, Nashville, Austin, Toronto or London. Yes, there are good bands everywhere and you can develop a strong following gigging around your hometown (early on, that’s smart). But the real decision-makers live where the record labels are. Naturally, it will be easier to get discovered if you play where the “discoverers” can see you. People in music business towns talk and generate a buzz just like the fans in your town. The difference is that those new fans might work for record labels, publishers, entertainment attorneys, etc.

Promotion is a key to success, so how are you promoting yourself? Are you using social media to your advantage? Are you going to shows and getting to know other local players? Are you offering to play benefits where you’ll be associated with bigger acts? Are you learning about professional organizations like BMI, ASCAP and SESAC? Are you associating with people in all areas of the music business? It’s hard to succeed on your own, so making friends who will eventually be moving up in the business is a smart way to begin opening doors. You might have already been discovered by someone who doesn’t have any clout yet, but could soon. Start sowing those seeds now.

6. Always, ALWAYS Go Back to Suggestion #1 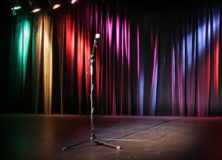 Check your motives. Great guitarists love playing the guitar. Like other artists, they don’t do it just for money and fame; they do it because they have a passion and can’t imagine doing anything else. Successful artists eventually turn their obsession into a business so they can earn a living doing what they love.

“Getting discovered” is an extremely rare and incredibly lucky byproduct. Don’t let it haunt you. Instead, develop your passion. Fall in love with playing. Immerse yourself in becoming a better guitarist and artist so that if you do catch a break (despite the odds), your fire and artistry can inspire others—rather than simply cause them to ask, “How do I get discovered.”

This rings true Ronnie Brooks! Gotta have that joy or it’s not worth it.
I’ve always heard that money follows great ideas, also. So it seems like great songs would attract attention. Thanks for this!

Great article! A good reminder about motives that can be applied to anything in life.

Nice, Ronnie. Great advice there. I remember my days as an aspiring musician back in 1968. The Viet Nam “conflict” was really hot and heavy and I couldn’t believe that I was still undrafted. I decided that my budding music career was about to end and I might as well love what I got from it and not waste time worrying about the draft. My last 6 months were so much more fun and rewarding. Wouldn’t trade them for for a chance at discovery today.