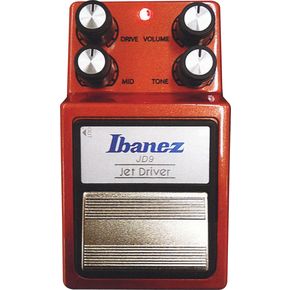 And now for something quick and awesome.

That being the Ibanez JD9 overdrive pedal which was built with the sound of those hand-built pedals of yesteryear in mind.  As the model name inplies it’s part of Ibanez’s 9 series which includes such hits as the FL9 Flanger, CS9 Chorus, and lest we not forget such fan favorites as their varied lines of TubeScreamers.

Well now those TubeScreamers have to move over because the new kid on the block has something to say for himself.  And just what might that be you ask?  Well according to the product description it would probably be something to the effect of how wide a tonal pallet you will have at your disposal.

By the powers of the built-in drive, volume, mid, and tone knobs you too can harness exponential proportions of volume output.  Doctors recommend such a thing to add some extra “umph” to your tube amps.

Just take a look at this video we just happen to have sitting here for an audio taste of what this seemingly innocent little gadget has in store.  In case your curious the Ibanez JD9 can be yours for a quick $89.99.

You can find the Ibanez JD9 pedal here.