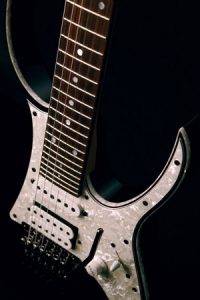 Ibanez is banging out a brand, spankin’ new RG model guitar, and this isn’t just a rehashing of the same old, same old, but rather brings something new to the table as a whole.

Introducing the RG2011SC which cranks the fretboard up to 30 frets.  While they’re not the first to do this and while 30 isn’t the most frets any guitar has ever seen, Ibanez will probably be among the manufacturers to make this design more famous.

Of course with the extra elbow room for the neck there is surprisingly less room for the neck pickup, so the neck humbucker that Ibanez traditionally slaps in their RGs is absent and the single coil takes over.  Or so it seems.  Ibanez saw the lacking pickup tonal variety and compensated accordingly.  While the pickups are limited to a humbucker and a single coil, the 5-way switch toggles a pickup simulator which allows the pickups to attain the sound of the sounds you’d normally get out of a HSH setup.

The guitar itself is alder with a maple neck and a rosewood fretboard, two DiMarzio active pickups with a True Velvet single coil at the neck… or middle… or whatever it’s supposed to be, and a Tone Zone humbucker right next to an Edge-Zero tremolo.

While this particular guitar is of the limited edition variety, I imagine if it’s received particularly well then we could probably expect to see more of these pop up in the future.

Seems like it would be great for guitarists that tend to write things that can’t be played on regular guitars or anyone that’s really into piccolo music.

Ibanez just recently even released a video of All Shall Perish guitarist Francesco Artusato jamming away on one.

You can catch some cool, melodic shreddery along the way.  Check it out.  It’s pretty cool.