Pajoche – Taste Test and some extras 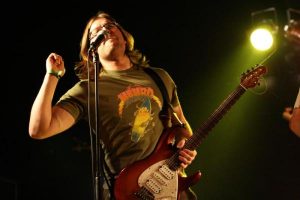 Pajoche is a Czech Republican dude that lives in Ireland and assumes a Spanish nickname for his musical endeavors. To simply sum Pajoche multi-instrumentalist Pavel Ovesny up as creative would not be inaccurate, but it would if anything fall short as an understatement.

Each song I’ve heard has had as expansive an attention to detail as you could hope for and with each listen I find myself constantly spotting all sorts of new little details that have me coming back for more listens. It’s like a musical treasure hunt or something

It isn’t long into Taste Test that Pajoche’s influences start to speak. In fact I feel like they’re outright screaming at me like the insubordinate that I am.

Regardless of what his influences are or aren’t I’ll tell you what it really reminds me of. Joe Satriani. For a few reasons. The dark, fuzzy rhythms and melodies up against energetic, programmed drums really paints a kind of Engines of Creation image in my head and it’s all reinforced by his tasteful exploration of effect pedals. His seamless versatility to play from one style to another also helps defend my case. Granted Satch isn’t the only person I could compare this to, he’s the first one that popped in my head so he wins.

Having said that Pajoche is a far cry indeed from being a Satch knock off. The EP, short as it may be, is hardly a one-trick dog and his music shines with a personality of its own and that personality has me more than willing to come back on my own volition.

The mix is as crystal clear as anyone could possibly hope for. There are parts where the guitars are thick with lows or chiming with bright highs, but in any case it’s always by design and it all really helps bring out the character of the music. I’d wager if anything perhaps he enjoys toying with the mix as much as he does during the recording process given the tinkering applied during post.

While small details like creative panning or filters that fade from low to high really give a certain depth to the music and while not sounding like a whole lot they add a lot to the whole. Even the faintest of things heard in the background feel right at home.

The bass with its how-low-can-you-go tone is very present in the sense that it could probably rumble the trinkets on my shelf off if I were a bit more liberal with the volume. The drums, programmed as they may be, sound as human as you could hope to be save for the parts where the obvious intention was a mechanical sound. Pajoche humanizes well. The keyoards offer nice touches to the chords, but never really come beyond their own sort of comfort zone. Rather they sit somewhere around the mid-section and do what they can to make whatever feeling Pajoche wants to express really shine.

In the mix of the various songs are some covers that thoroughly exploit his creativity as well. These aren’t simple covers in the sense that he just learned the progressions, banged out a melody, and called it a day. No, that would be too easy. These are full-fledged re-imaginings of songs.

Ok, so the MIA cover is kind of like a straight forward cover, but the Maroon 5 Move Like a Jagger has been converted into a metal instrumental. The Nirvana cover of Smells Like Teen Spirit is a whole new song built around the lyrics with a few liberties taken on the vocal melody. And it is beautiful. It starts off as just the voice and the song builds to something bigger and bigger as it goes on and were I in his position I would not do a single thing differently. I’ll be so bold as to say this is how a cover should be.

When we first started doing these independent reviews this is the kind of stuff I was hoping would come our way. The music is great and bolsters through with shimmering clarity and it’s very addictive. There is much life in Pajoche’s music and while I can’t understand a lick of the lyrics the music itself is plenty universal enough a language to tell me it’s awesome.

He’s also giving his music up for free download. You can chalk it up to a personal favor to entertain the opportunity.

Editor’s Note: Soundcloud buckled under its own weight while I was listening to the music, so here’s a bunch of links to choose from while they see a proctologist about their cranium-stuck-in-the-rectum syndrome.