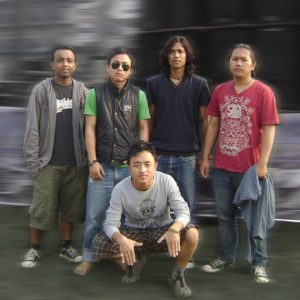 Well NAMM certainly deprioritized everything else. Getting back on track the next thing on my to do list is… The Mangalz. Independent rock/metal group from India starring the vocalist X’zing, guitarists Haggai and Daarjey, bassist Baba, and the drummer Sachin. You know what they do? They rock more than the Rock rocking out in a rocking chair with a rock.

Having listened through the handful of songs that showed up on my desk I can infer that they certainly aren’t songs from the same era as opposed to an album of songs from one era. Because of that it’s a bit cumbersome to present one-size-fits-all comments, but hey. We’ll see what happens.

In my brilliant and inspiring introduction paragraph I regarded the Mangaz as a rock/metal band. They live up to this categorization. There are various characteristics of differing styles that could aid in a nigh endless list of sub-categorizing, but for all intents and purposes rock/metal works well, and they’re good at it. Having listened through the songs you can tell stylistically which ones are older than others as they’ve developed a great sense of melody and harmony that really aides the songs to say something. Earlier songs however, have a bit more emphasis on metal and are less melodically driven.

In a stylistic sense they’re not a band that’s afraid to embrace opportunities to explore different feelings. From darker, more aggressive songs to brighter, slowed down songs. I don’t foresee any accusations of the Mangalz being one-trick dogs any time soon. Variety is, as they say, the spice of life.

In the sense of performance the Mangalz are very straight forward. There are solos to be found, but more than anything they are there to explore melody and build on that than they are to demonstrate as much technical prowess as possible. For that the solos are much enjoyable to hear. Technique applied in the solos is tastefully done and serves the means of exploring the melody very well. There are some sweeps here and taps there, but no one particular trick is ever used so much it outstays its welcome.

The rhythm guitars hold the the rhythm strong and keep the groove going and really lock in with the drums. If it’s a metal song you’re listening to they’ll chug right along like the Hulkamania ready to run wild on someone’s face. For the slower, groovy, rock songs the rhythm guitars tend to bring it down a notch and let’s the harmony of the progression coupled with the melody do the talking.

The drums are very easy to hear in any case and they’re performed very well. There are also some cool tricks to hear from the bass as well. In earlier songs the bass tended to keep to itself, but it can be heard coming out of its cubby hole to do some nifty things. The vocalist comes through clearly as well and if you know the language he’s speaking in you can probably sing along quite easily.

Much like the song writing the varying points of recording are much evident in the mixes. That is to say that the songs seldom share the same mix. The earlier songs are a bit rougher, but are never painful to hear or anything. You can hear the instruments just fine and you can certainly hear what the band is doing so that’s good. As they’ve progressed the mixes get better and the instruments get that locked in feeling that makes it all feel whole.

They’re good. Really good. More than anything this could pass as a comparison of where the Mangalz have been and where they’re going. You can hear the songs and performance really maturing into something bigger. It’s instances like those that make the real personality of the band come through. For that the process of writing this has been an enjoyable experience, but at the same time has me curious to see what will come next.

Give them a listen yourself. Why not?
http://www.reverbnation.com/themangalz