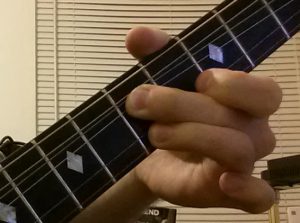 Over the years I’ve come to realize that I am evidently interested and very much a fan of mindfulness. I’ve adopted meditation (something explored on the guitar by both Nicholas Tozier and myself) into my day to day life and frequently enjoy the excitement of sitting around in complete silence for prolonged periods of time. I’ve found it is relaxing and therapeutic; and with routine practices in anything comes experimentation. This time around I decided I was going to meditate on my guitar.

By now you may be asking “what’s so insane about this?” Well, after an hour of bending you start to get a bit creative with the technique. First thing I did was cycle through every habitual way of bending I’ve already made a part of my style. By about the 10 minute mark I grew bored with that and the real experimentation began. Below is a list of some of the more interesting ideas I’d tried out along the way.

Probably the most obvious trick to try out is the rate of the bend. There are a lot of avenues to explore, especially when you bounce back and forth with slower and quicker bends. How many bends do you cram in before strumming the string again? How many times do you pick during each bend?

Then there is the direction you’re bending. Do you usually bend the strings towards your thumb? Or do you pull it towards your fingers? Both alternatives have their own feeling and overall sound and the directional idea alone ultimately led to most of the ideas I had throughout this exercise.

Speaking of paying attention to the direction you’re bending. After the initial wave of boredom set in from my usual style I started making all sorts of shapes with my fingers. I’d bend the string as I outlined the fret inlay. I made a perfect circle that went from both of the surrounding frets. Triangles, pentagons, you name it. Subtle as it may have been it turns out that each shape had its own sort of sound to it, and on top of that I realized this is an excellent way to build some blisters on your fingers. It may hurt like a bitch when you do this, but those blisters will harden into turtle shell callouses.

Another trick that will strengthen all those tiny muscles in your fingers would be to use each finger. Each finger has its own level of strength and therefore cannot bend the string exactly like the others. Plus, I don’t know if you’ve noticed this or not, but your pinky just doesn’t have the same reach as your middle finger. So there will be differences in the overall sound and the goal here is to explore those differences and learn to control them.

Here’s a quick list of the tricks I’d tried with each finger.

Use each finger individually

Part of the experiment here is to break the mold of habit.  Try new things.  No two fingers gets the same amount of exercise for any given technique.  This isn’t necessarily to be seen as just strengthening your fingers to be able to do the same thing with each.  Instead this is more to find out how differently you play with each finger and ultimately how this adds to your palette of options.

Keep the unused fingers away

Along the way I started trying to keep the fingers I wasn’t using as far from the fretboard as possible.  This proved to be ridiculously hard.  It takes more relaxation and muscle control than I think I’ll ever have (assuming it’s even possible) to not have at least two fingers on the fretboard at the same time.  However this will test your muscle control in a whole different way and ultimately your control over the individual fingers.

Assuming you’re on a fret big enough, use two fingers on the same string to bend.  A lot of the time I’d spent stressing just one finger at a time.  This practice did not feel particularly good as blisters started to flare up.  I’d tried taking some of the pressure off by reinforcing my bends with a second finger.  It still hurt, but I did notice it altered the overall sound a bit.  That has to count for something.

Adding a bit of a slide

This may be a bit weird to describe.  I never played any note beyond the one string/fret I was on.  Though I did try adding a sort of a slide in there with the bends, but never to the point where I could hear any other notes.  I started on my index finger, bent the string, then quickly slid down and shifted my middle finger into place.  I did the same for the next finger, and again for the pinky.  Then I reversed the process and went back and forth.  Yet again, it’s ideas and experiments like this that begin to surface as you spend more and more time on one concept.  Ultimately this is where the real fun and bonding with an instrument surfaces.

I had an hour to work with and I’ve been working on my lefty performances. While I was at it I decided to try everything I’d done with one hand on the other. This turned out to be enlightening to some degree. My right hand does not fret strings nearly as easily and pivoting is uncomfortable. I took this as incentive to observe my left hand much more closely to see just precisely how I do what I do. I had noticed that very little of my left hand gets used when I bend strings. The neck rests just under my first finger and my thumb joint is completely peripheral unless I push the string towards it.

I took this observation and focused on recreating the form with my right hand, though I’ll be honest. Outside of just knowing your own habits more in depth and recreating your style on the other hand I don’t readily know how practical this is, but it is interesting none the less.

I’ve been working on this article for a few days now since I’d done the initial exercise. It still feels pretty weird to type. My day job involves a bit of handwork has well, sometimes resulting in downright displeasing side effects. I also ended up with blisters on all eight of my fingers.

While I cannot speak on behalf of all levels of guitar players out there – I’m sure there are those that wouldn’t be phased by this sort of thing – some may very well feel the pain out of this. After all you’re jamming your fingers into a piece of metal wire.

There is something to be said about pushing through (or rather bending through) the pain, but don’t be reckless about it. Take a look at this picture. Blisters are one thing, but you don’t want to strike blood. As cool as it is to brag about, blood means open wounds which means recovery time which means inhibited guitar playing. We don’t want that. Playing on scabs is a pain. This may be all the more reason to switch hands throughout the experiment.

Regardless of what you do this is an excellent practice to help you make a given technique your own. These are my own discoveries and should you do this I’m sure you’ll come up with your own. Hell, feel free to let us know what you come up with.

Until then. Rock on.

Wow, Smitch… I’ve never thought about the way I bend strings. I bend how I bend. Now, after reading your post, I’ll have to try some new techniques just to see if you are blowing smoke or not! Seriously, very thought provoking. You got me thinking about it and that’s the point! Thanks.