Joe Bonamassa is on a roll and continues to roll. With ten solo albums to his credit, side projects with vocalist Beth Hart, and the hard rock band Black Country Communion, you might say his career couldn’t get any better. His new record is called Driving Towards The Daylight and it’s his return to traditional blues.

He’s known for his to-die-for gear choices, rich guitar tones, and great playing, but there’s more. He’s a successful artist who has emerged as a unique voice within a huge guitar community. He’s created his own universe in which cookie cutter titles and knee jerk comparisons don’t apply. Love him or hate him, he does his own thing and he does it well. GM caught up with Joe Bonamassa to find out what makes him tick.

You tend to add a little twist to the blues. Where does that come from?

The key is how do you put it into a different context? How do you make it different? How do you separate yourself from the pack and go out and be able to draw a crowd when you play the guitar?

Are you talking guitar playing or songwriting?

People who usually do the lumping don’t have an ear for nuance and guitar influences.

“Oh you’re a blues guitar player so you must like Stevie Ray Vaughn.” Well, I admire the man’s music but let’s not go to the lowest common denominator and take the Wikipedia definition. There’s a deeper thing. I’m a British guy. I’m from America but British blues is my thing. 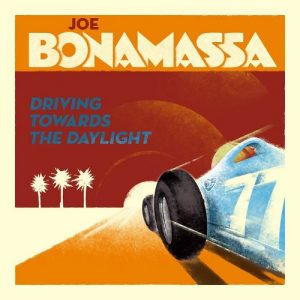 I bring more stuff for the solo gigs. I have thirteen albums I have to get to. For Black Country Communion I bought like seven guitars. Mostly I played a couple of my signature model Les Pauls and my first ’59 Les Paul standard sunburst. Since then I’ve purchased two more. On tour we have two ’59 Les Pauls, a ’60 with a Bigsby, two dot necks, a ’60 and a ’61, a ’53 Blackguard Tele, a ’54 Firebird, a ’57 Gold Top with P90s, and uh…

I have the first and only Steve Morse guitar called The Dark Lord. It’s basically a Steve Morse guitar painted black and has a reverse headstock. Amp wise I’m using two Jubilees (Marshall 2555), a Trainwreck Liverpool from 1990, and a prototype from Jim Kelley built by John Suhr. It sounds freakin’ wicked. So if I can’t get it done with that junk, then I really need to go home. (Laughing)

The people who ask me, “Why do you bring the real ones out?” I say, “Why not?” I’m on the road nine months a year. I’m more comfortable knowing that my three girls are twenty feet away from me at all times.

Aren’t you afraid of thieves?

You can steal them all day long. Just don’t drop’em. Try to fence that shit. My serial numbers are so known. I’ve gotten to know the community of buyers so well. I consider a lot of these guys my friends, been to their houses and had dinner. We pull them all out and it’s a geek party.

Everybody knows the serial numbers and the tops. The ’59 Les Pauls are like fingerprints. What are they going to do with it? Now the thing is I don’t bring them to Eastern Europe and I don’t bring them to South East Asia or places where they can disappear quickly. They’re fully insured and we take care of them.

My thing is, why not play them. If you own them, play them. I play some custom shop stuff from Gibson, the original ones, and everything in between. To me a guitar is a guitar and they need to be played. Not be in museums or treated like holy relics.

When you walk out on stage doing “New Classic Rock” with Black Country Communion, they wanna see the real thing. The old Les Pauls and Gibson Vs are part of the show.

I try to put on the gig that I would like to go see. I’m a gear nut. I’d rather talk about gear and amps than music or myself. If I was sitting in the audience and I saw some crazy nut bag in a suit, running around playing amped up British blues, and two or three bursts come out, then a Tele, then some dot necks, and then a Firebird… At least that’s fun to watch!

What do you do when you don’t feel like playing guitar but you have a gig?

Twelve-ounce sugar free. But I always feel like playing guitar. It’s all really about being in the right headspace than anything else.