Is Someone Messing With Me? How to Develop and Maintain a Consistent Guitar Tone 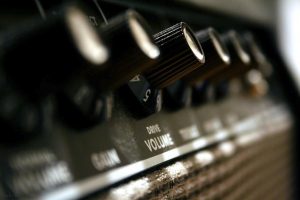 We’ve all been there. You hear that song, with that tone, and you gotta have it. But for whatever reason, you just can’t get it. Or worse, after hours of screwing with your amp’s EQ, adjusting your technique, and tweaking the tone knob on your guitar, you finally get it – or something reasonably close to it. Satisfied, you lay your axe down, but when you come back to play the next day expecting to sound like SRV, the tone just isn’t there.

What happened? Is a mean-spirited guitar gnome sabotaging your gear? The short answer is yes, and you should always keep a shotgun nearby. But without getting too much into gnome history and culture, here are a few tips on how to discover and hang on to the tone you’ve been looking for.

1. Don’t Try to Fit a Harrison-Shaped Peg into a Petrucci-Shaped Hole

In most cases, it starts with the gear. This may seem obvious, but it’s worth mentioning considering how many misguided guitarists are confounded by their Danelectro’s inability to get death metal tones.

So, when you’re choosing a guitar, make sure that it’s going to serve your needs. The main thing to keep in mind here is the type of pickups you’re using. For those of you unfamiliar with pickups, here’s a quick rundown:

-Single coils have a bright, shimmery tone, due to a strong treble response. They’re found in almost all Fender guitars, and are responsible for the classic Tele twang and Strat quack, among many other tones.
-Humbuckers can be thought of as two combined single coil pickups. Because of this, they usually have a higher output than single coils and produce less hum. They also have a stronger low-end response. Most Gibson guitars come with humbuckers.
-P90s are a type of single coil originally used by Gibson on certain Les Paul and SG models. They’re brighter than a humbucker, but with more mid-range punch. Though somewhat uncommon, P90s strike a nice balance between single coils and humbuckers.

Another thing to consider with pickups is active vs. passive. Pickups are passive by design, but some guitars use active pickups, which usually have an internal preamp, active EQ or similar effects. Active pickups have especially high output and are thus favored by metal players. The downside? You need to put batteries in your guitar.

No, I will not apologize for the pun.

The world of guitar amplifiers is comparable to a Darren Aronofsky film. It makes sense at first; then as you continue to think about it, you realize that your brain is melting. I don’t want my brain to liquefy today, so let’s simplify the subject, shall we?

Tube or valve amps use vacuum tubes to boost your guitar’s signal. In addition to emitting a lovely glow, these tubes are also responsible for that warm, touch-sensitive overdrive that’s become a trademark of blues and rock. The downside to tube amps, aside from having to replace the tubes periodically, is expense. Because they’re so sought after, a high quality tube amp will set you back quite a bit.

Solid-state amps don’t use tubes, and thus lack the natural overdrive and complex tonal characteristics of valve amps. Because of this, they’re often frowned upon by tone junkies. Still, digital circuitry allows for more features, including multiple effects and amp modeling. They’re also much more affordable than tube amps, and some solid-states have tubes in the preamp stage for a more organic vibe.

Most guitarists prefer tube amps, but some solid-states have withstood the test of time. For example, the Roland Jazz Chorus is a favorite among effects pedal enthusiasts, due to its pristine tone and extensive headroom.

3. Pedal to the Metal

The joy and frustration of effects pedals is that they give you an infinite number of ways to shape your tone. Delays, reverbs, phasers, flangers, chorus, wah…the list goes on.

So we don’t get lost in a maze of knobs and switches, let’s focus on one effect: dirt. Distortion can make all the difference in your tone, especially if you’re using a solid-state amp with no natural overdrive. In fact, overdrive pedals are among most fundamental building blocks of tone.

Overdrive might get the job done for some guitarists, but higher gain genres require higher gain pedals. If you’re into shoegaze, metal, and psychedelic rock, you’ll want to look into fuzz pedals, such as the classic Electro-Harmonix Big Muff.

Not sure whether you want overdrive or fuzz? There are plenty of good in-between stompboxes that cover a lot of sonic territory. A great and affordable option in that category is the Pro Co RAT, which ranges from a slightly dirty boost to thick waves of distortion.

While trickier to dial in, layering multiple distortion pedals can yield some harmonically rich and thoroughly awesome tones. Bear in mind that the order you place your pedals in can have a drastic effect on your sound, so have fun messing around with your signal path.

4. Free Yourself from the Shackles of Routine; or, Paper Is Your Friend

Okay, so now you’ve got the gear you want. Time to mess around with it. Finding the right tone can take hours, but it can also lead to some pretty cool discoveries. Once a week (or once a day, or whatever), add some time onto your practice routine to explore your pedals and try out new techniques.

Do you sound like Clapton yet? Great! Now, after all that time developing your tone, we come to the final step: keeping it consistent.

Basically, it comes down to memory. This can be a challenge, particularly for us those of us who enjoy playing in altered states. So, whenever you make a profound tonal discovery, write it down. Write down the positions of your pedals’ knobs, your amp’s EQ, the way you fretted/picked the string – whatever helps you remember how recreate the magic.

If you don’t have a pen nearby, or you’re illiterate, recording is an equally effective way to jog your memory. But it might take a little longer to recreate the sound, depending on how complicated your rig is.

With these tips, a little luck, and a Remington 870, you should be able to seek out your ideal guitar tone while controlling your guitar gnome infestation. This article covers a lot of ground, so if you have questions, feel free to ask!