Jason Becker “Not Dead Yet” Documentary Now Available For Streaming 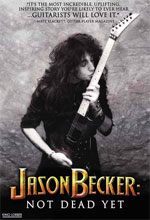 In “Crazy Wisdom: The Life and Times of Choegyam Trungpa Rinpoche,” the titular subject of the documentary asks a room of acolytes: “Supposing you become enlightened. Then what?” Rinpoche implies that enlightenment is merely part of the journey and not a goal in-and-of itself.

I was reminded of this question when I watched another documentary from the same online distributor, Alive Mind Cinema: “Jason Becker: Not Dead Yet”. In this engaging documentary, Becker, a guitarist, composer and ALS survivor provides an inspiring answer to a related question, “Supposing you reach the summit of guitar playing, and have that ability taken away. Then what?”

“Jason Becker: Not Dead Yet” follows the journey of Becker, one of the most talented players ever to pick up the guitar. A person destined for super stardom at the age of 20, Becker had recordings on Shrapnel Records, the most influential shred label of the 80’s and 90’s, and international tours under his belt.

At the peak of his career, while recording and preparing for a tour with the David Lee Roth Band (replacing Steve Vai in the most coveted guitar slot at the time), Becker was diagnosed with Amyotrophic Lateral Sclerosis (ALS). More commonly known as Lou Gehrig’s disease, ALS is a terminal, physically degenerative disease. Becker was given a life expectancy of only two to three years, and the disease gradually cost him the ability to play guitar, walk and even breath on his own.

.
Defying the odds, “Jason Becker: Not Dead Yet” catches up with Becker twenty years after his diagnosis. Although he does not have the ability to speak in his own voice or move any muscles but his eyes, Becker is still composing music with the help of family, friends and technology. Looking at individual letters on a grid devised by his father, Becker uses eye motion to compose words. These words correspond to individual notes and rests and it’s up to Becker’s father to interpret Becker’s eye movements and enter the notation he’s describing into Logic Audio.

Director Jesse Vile had unprecedented access to Becker’s friends and family and created the thoughtful documentary that includes rare photos and videos. The film showcases the great strides Becker made as a player (check out the video of a 15-year old Jason tearing his way through Yngwie Malmsteen’s “Dark Star”), and it also documents Becker’s inspiring attitude and indomitable will as he continues to create despite adversity.

A Lesson from Mr. Becker

About an hour into the film, there’s a wonderful moment of the film that shows Becker working with his father to realize the music in his head as a MIDI track of nylon string guitar playing. Even without physically playing the notes, there’s plenty of great material in this excerpt from the film that might help generate some ideas in your own playing.
The tuning for this excerpt is drop D (low to high D, A, D, G, B, E).
Bars 1-5

While the MIDI file is written to support two guitar lines, I’ve only written out the melody line and indicated the bass notes above the staff.

Measure 4 brings in a scale sometimes called Hirajoshi (in this case B Hirajoshi – B, C#, D, F# and G). Hirajoshi is actually a Koto tuning and the scale is also known as a mode of a scale called the In scale (in this case F# In – F#, G, B C# and D). Becker uses this mode a lot in his melodic passages and creates a sequence with it later in this example.

This leads into the really cool intervallic leaps and position shift over the D in bar 10. Try using alternate picking of hammer ons for the two notes on each string.

Bar 11 features a blazing B Aeolian/D Major run that covers several octaves. The tempo of this is about 160, so getting those scale passges clean and up to tempo is going to be no small task!

Bar 12 features a final idea that gets a neat drive from just four harmonically ambiguous notes (D, E, A# and B or R, 9, #5 and 13) played over octaves. It’s an ear twister that undoubtedly leads into something equally cool.

But we’re not providing an audio example this time. If you want to hear how cool the excerpt is, I urge you to support the Becker family and purchase the film.

The costs associated with treating an illness like this can put any family under incredible financial strain. Thus, if his music or story has moved you in any way, please consider going to Jason’s site or the official film site to make a purchase or a donation.

“Jason Becker: Not Dead Yet” will be available on dvd in December of this year from Kino-Lorimer, but you can download it now from Alive Mind Cinema. It’s a film that every guitarist should see.

You can see the trailer here:

‘Jason Becker: Not Dead Yet’ [ Official Trailer] from Opus Pocus Films on Vimeo.