Well, well, well. The pinnacle of guitar achievement Joe Satriani strikes again. Or at least he’s making preparations to strike again which will happen in the form of a full tour of the United Kingdom, a brand-spanking new solo album, and a box set. 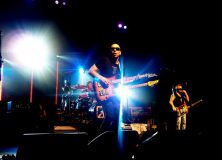 Ok, you lucky United Kingdom citizens. It’s been two years since your last dose of Satriani and you’re about to get another shot. Satriani has released a full UK tour schedule slated for action in June after his Australia master class clinic which is on five intermittently separated dates from April 8th through April 17th.

As for his tour in specific the dates and locations are listed right below… in case you couldn’t just see that for yourself.

The released information on the album isn’t as far reaching as the tour, probably because not as much is as set in stone. No title or tracks have been announced, but given Satriani’s history I’m guessing it’s going to involve some intergalactic time-warping robot that surfs on a guitar while doing the robot. At least it would be awesome if that were the case.

Currently Satriani is expected to hit the studio later in the year to begin the historical documentation of his follow up to 2010’s Black Swans and Wormhole Wizards which is speculated to be released around the same time as the aforementioned tour. With that in mind it’s probably likely that he’ll be playing some of these new songs while gracing the lot of UK.

Interestingly enough since 1998 Satriani has had a bi-annual release since then making this the first one that will edge just over the two year marker. But he’s also been busy with Chickenfoot who had a 2011 release not long after Black Swans was released, so it’s not like Satriani’s turning into Slackriani.

In addition to the upcoming album Satriani will be releasing a commemorative box set that reflects on his multi-decade career as the guitarist in charge. Much like the album this is about as much information as has been released on it, whether or not it will include anything from the impending album, whether it will be exclusive to his solo projects or reflect on his work with Chickenfoot, or what kind of special unheard tracks will be released with it, or any other bells and whistles to flourish the box set experience.

However the box set is currently expected to see a springtime release in 2013. By then I imagine he’ll probably have spoken up more about what’s going on, so there is that.  Unfortunately this is where that patience garbage our parents harped at us about in the days of yore comes in.