So just the other day I was talking to Tim about various behind the scenes, inner workings of Guitar-Muse when he slapped me in the face with the name of a certain Jonas Tamas. He said to me, “dude, you’ve gotta hear this guy.” So I gave him a listen trusting that he’s never led me astray and… well… after listening this artist spotlight was inevitable. 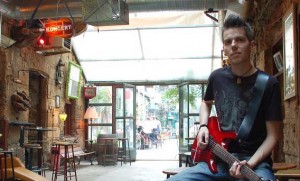 Jonas Tamas is a good reminder of why the genre of instrumental guitar music exists. A Hungarian-born guitar whiz, Tamas is the kind of guitarist that makes his melodies sing like an actual vocalist with delicate phrasing and excellent technical versatility from blazing sweeps to subtle gestures that might not be noticed the first listen through. And he’s had a monopoly on my MP3 player for the past few days.

Combine the very essence of tight rhythm with silky smooth maneuverability throughout the neck and a dash of clever technical phrasing and you’ve got a good idea what Jonas Tamas’ style is all about, but more on that in a bit.

Having established a name for himself in his home country, Tamas has gradually been taking the world by storm and building momentum along the way. Prior to his solo career he made contributions to OSV from their 2009 release Second Thoughts through their 2011 release 4 Warned, which seemed something like a cross between Dream Theater’s progressive nature and Ron Jarzombek’s experimental style.

What really makes Tamas’ music fun is you can make a game of name the influences out of it. When he wants to he can really nail the styles of his influences from the emotive phrasing of Satriani to subtle whammy dips synched with upward sliding chords like Vai. Amalgamate that with some Petrucci-styled rhythms and some fearlessly deployed odd time signatures then throw some spacey synths for texture and you’ve got concentrated audible awesomeness.

On top of that his music embraces that nice form of subtlety. One listen through doesn’t divulge all the little nuances, giving listeners with a great attention to detail a good reason to listen again.

Consider Tamas recommended, and since I don’t recommend things that suck you can bet he’s worth your time.

For more info on Jonas Tamas, insights on his music, and tips on playing the guitar check out JonasTamas.com.

Who wants to read about how awesome music is? Bah, that’s boring compared to experiencing the real thing. By the powers of modern technology I give you Jonas Tamas.