An Example of Immersion 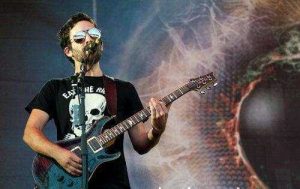 Karnivool is pretty much the poster child of modern progressive rock and metal. Now that their third album Asymmetry (a perfect name for an album with such an odd and off balanced feel) has been released and I’ve finally had the chance to give it a listen, it’s time to throw some love in the direction of the Australian guitarists Drew Goddard and Mark Hosking for demonstrating what it is to obsess over the guitar. After all where would the guitar be were it not for people that envelope themselves in every aspect of the instrument?

But that’s a whole different discussion. For now it’s time to talk about Karnivool guitarists Drew Goddard and Mark Hosking.

Goddard and Hosking both have a style that has formulated from countless hours of sitting on the floor, turning knobs on pedals and amps, and hearing the results. Experimenting with whatever time signature they may have found themselves in at the moment. Taking a consonant harmony and hulk smashing it into a dark, dissonant interval. All for the sake of seeing what happens. How things sound.

That’s what makes their music so enjoyable. It takes the typical, formulaic songwriting approaches and throws them out the window, and we get to hear the end result of God knows how many hours of tweaking and composing.

What they bring to the table is very moody. The best way I’ve been able to describe their playing is they sound like a musical teeter-totter. Sometimes they sound like a balanced, digestible jam group, then they shift gears into odd time signatures with complex guitar riffs and powerful drums. And it’s all mired in delay, I should mention. As much gear as they use it all probably pales in comparison to how much they use delay.

Here. Check it out for yourself. No need to rely on my own hype. 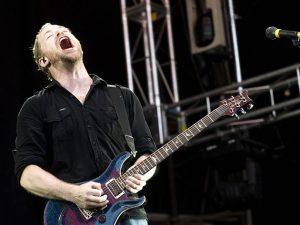 As far as gear is concerned both guitarists have expressed the sentiment “give us gear and we will tweak it”. Maybe not in those exact words, but throughout their lives as musicians they’ve done about anything they can with whatever fits into a pair of hands.

They can often be seen playing a variety of Paul Reed Smiths or Les Pauls, through classic amps like the Peavey 5150 or Marshall JCM amps. Things like those have become staples, but they hardly limit themselves to just that.

In an analogy think of those “guess how many jelly beans are in the jar” contests you see at carnivals. You can essentially play that same game with their discography. The only difference is you’re guessing how many different guitars, amps, and pedals they’ve used. A lot of guitarists these days have signature guitars, but I’m pressed to imagine either Hosking or Goddard having signature instruments just because of how wide a variety they like in their instruments. They are very invested in the differences gear can make in their music.

It’s awesome and they’re awesome. If you haven’t checked them out yet, do so. Totally worth it.