Korg’s Pandora multi-effect processors have been some of the snappiest devices out on the market for their ability to offer a huge array of effects in a device that can slip into your pocket. Nearly 20 years after the original Pandora multi-effect unit was release this snappy device is being released in a stompbox chassis. While the original models were excellent for studio use this new design makes it much more accessible for use in pedal chains, on pedal boards in addition to the studio use. Plus you don’t have to worry about releasing all the world’s evils when you turn it on. Just oodles of effects.

How the Pandora Stomp Works

The Pandora comes in a die-cast case about the surface area of a tape cassette. Within that small area of space is 158 types of modeling effects, up to seven of which can be active simultaneously. The Pandora Stomp includes two hundred presets that include more famous tones and one hundred rhythm patterns fit to cover about any style you want to throw at it. Plus, as far as rhythm concerns go, there’s a metronome installed so you can keep your rhythms tight and locked on… or in case you like constant reminders that your rhythm is off. Whatever your needs, Korg’s got you covered.

Not so subtle is the auto-tuner that takes up about a third of the real estate on the front. The LED displays in bright, huge letters the pitch your tuned to along with a meter to show how spot on you are. As far as pitch is concerned you can also plug an MP3 player into the AUX input to open up a +/-1 octave pitch shifter. 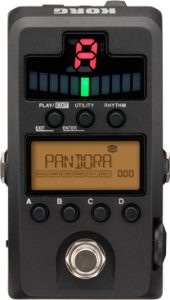 Looking into the multi-effect tools in the Pandora Stomp works just like any other effect with a master footswitch too toggle it on and off. Just under the LED display are four buttons labeled A, B, C, and D. Each of these are programmable buttons that can pull up presets stored away for safe keeping. The wheel on the right side allows you to cycle through the oceans of effects just aching to be tweaked.

And lastly, because Korg knows individuality is key, the Pandora Stomp comes in Cool Black and, for a limited time only, Chic Ivory and Pop Orange as well. The Pandora Stomp will be hitting shelves in autum of 2013 with a street price tag of $129.99.

DC9V power supply allows easy integration with a pedalboard. The Pandora Stomp will also operate on USB bus power for hassle-free integration with a computer. A free, downloadable PC editor/librarian makes it easy to create and manage sounds. The best part about the editor is it’s free.
Now for the power concerns. The Pandora Stomp fits right into the standard 9V model. On top of that it can use USB power with a computer. While you’re plugged into a computer you can use the downloadable PC editor/librarian to make and alter new sounds and load them right into the Pandora Stomp.

If this isn’t enough to satiate your every Korg need you can always swing by Korg.com for more info.