Line 6 And Jammit: Are They An Item? 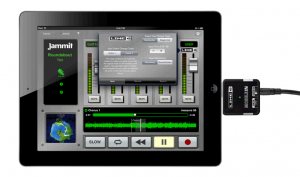 Jammit is an app that was first released in 2011. It offers the ability to isolate specific guitar tracks, loop sections, play with or without a metronome, and view sheet music and tablature, all designed to fully replicate how the musicians performed the songs themselves when recording.

Where Does Line 6 Fit In?

Line 6’s role in this partnership has been applying their expertise in tone modeling to accurately replicate the tones of the songs you’re working with. With the aid of Line 6’s Mobile In digital interface you open up the tone modeling capabilities to reflect the sound used in the song you are playing along with. To add to that the app will automatically tweak the tone along the way as you play.

What are The Requirements?

Jammit requires two things. An iSomething, be it an iPhone or an iPad or anything else that runs iOS 5, and while it’s not absolutely mandatory to use the app you will need Line 6’s Mobile In digital interface if you wish to exploit the tone modeling to its fullest potential.

And for what it’s worth while it’s currently only available for Mac products they do have a Windows version in the works, so fear not faithful PC users.

What Does It Cost?

The Jammit app itself won’t cost you a penny. It’s available for free in Apple’s app store, though you will have to purchase songs through the app with prices that range from $1.99 to $5.99. Of course to get the most out of Line 6’s contributions you will need to pick up a Mobile In digital interface which will run you about $79.99.

If you are at all hesitant to make the financial splurge the app itself is free and there are 30 second demo songs available to test the waters with. It is also worth noting that various songs do frequently go on sale.

Though that is a nice looking resume on its own, it’s one of those things that is only going to get bigger and bigger.

Line 6 has played an integral role in helping to shape modern guitar and musical technology with their various tone modeling amps, effects, and guitars as well as their contributions to the world of software, to name a few things they’ve had their hand in.

Jammit software has beaten the industry to the punch in being the first to offer a means to isolate individual audio tracks with probably the greatest accuracy and preserved audio quality when a track is isolated.