Guitarists looking for studio-quality recording alternatives that set the precedence for portability need look no further than Line 6’s recently announced Sonic Port interface. This miniature interface can plug into any of your iOS devices and set you on a path to realizing your musical visions regardless of where you’re at. 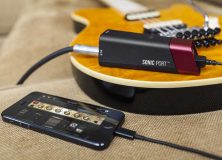 What if you’re at your buddy’s place, palling around, or maybe you’ve chained yourself to a tree to protest… something? Or maybe, just maybe, what if you’ve found yourself trapped in a well? What are you going to do while you wait on Lassie to get help and you’ve had a musical idea? Well if you remembered to bring your iPhone, a guitar, and a Sonic Port then you have no reason to fear. Where ever you are you have a way to document those potential Grammy-winning notes.

The Sonic Port Under a Microscope

Insofar we know the Sonic Port is small. While I don’t know the exact dimensions pictured above is an image of the Sonic Port near an iPhone to give you an idea of how much space it takes up. You can gather it will easily fit in your pocket. The Sonic Port works with CoreAudio apps giving guitarists the freedom to record or outright perform through their iDevices and with the Mobile POD app (free for download) you’ve got everything you need in your pocket.

The Sonic Port’s design is pretty simple too. The slim prism-shaped interface features a ¼” guitar input, an 1/4” guitar output, a 1/8” headphone jack, and a 1/8” stereo line input jack on the front side. The backside features a port for lightning connections. A detachable 30-pin connector is also included for those with older iOS device models. Between all of these you’ll be plugged into Garage Band and tracking in no time.

Speaking of tracking. The Sonic Port records in 24-bit/48KHz audio with a 110dB dynamic range. Thought you’d like to know. 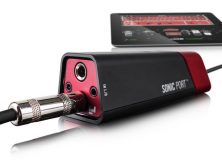 The Mobile POD app will give you immediate access to 32 amps, 16 speaker cabinets, and 16 different effects, all tweakable to your heart’s content. Mobile POD also grants you over 10,000 presets from Line 6, reputable guitarists, and other Line 6 users like you.

Then there’s the Jammit app that the Sonic Port is also compatible with making practice much more accessible. Jammit is an award-winning app that aids guitarists in learning songs from an available library of tablature/sheet music. Along with the Sonic Port and other Line 6 interfaces Jammit will automatically load amp and effect models custom to the song loaded and any changes in the tones will automatically be tweaked along the way.

In addition to the aforementioned 30-pin connector, the Sonic Port also includes a lightning connector cable.