Time for an Upgrade

Line 6 has at long last announced the next tier for the brand that put them on the map. What happened was the original POD HD500 was wounded nearly fatally in an aircraft crash. Then the scientists at Line 6 looked at the comatose effects pedal and said, “gentlemen. We can rebuilt it. We have the technology to make it better. Better. Stronger. Faster.” Then a big band jazz group started playing while a montage of Line 6 engineers constructed what is now known as the Six Million Dollar POD.

Actually they’ve called it the POD HD500X… and I may have bent the truth a tad for the true origin story… and I have no idea how much their budget was to build the pedal… but it is better and stronger, and if it can move any amount of distance on its own then it’s faster too. So let’s take a look at what makes it so. 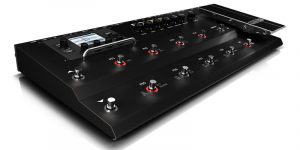 The HD series has been widely praised for its high-quality tone, and I recall in our reviews for the Desktop and HD300 models I’d wondered just how they were going to take the line up to the next level. The starting place for the answer to that question is to offer more of everything that made the first wave of HD effects great. While I’ve not seen anything that shows specific amp models on the HD500X, they have released a list of 30 amps which the effects are based off. Whether this is the full list or not, I do not know, but it is already more than the original HD500 offered. Plus it has over 100 effects built in adding more options to color your tone.

Among cooler new features of the HD500X is the upgraded hardware. I don’t know the exact numbers, but with the upgraded processing power the HD500X is able to support bigger and more elaborate pedal chains with mixed HD amps, cabinets, microphones, and effects. They’ve also thrown 512 presents in there for good measure, so you’ve got stuff to work with off the bat and space to store your sonic genius, and as long as we’re talking sonic genius the expression pedal can be assigned to control amp and effect parameters.

Considering all the modern ports needed, Line 6 included everything you need to plug into an amp, a PA system, and a computer for whatever your needs may be including balanced XLR outputs, MIDI, S/PDIF, and USB 20.

On top of that Line 6 takes a few pointers from Apple’s playbook in progressively making more and more of their gear connected. The L6 input allows Line 6 gear to communicate and offer new tones, setups, and features that are not otherwise available, so if you were to plug a DT series amp into the pedal both would auto-optimize to give you whole new sounds. Likewise since the Variax guitar has been out taking names Line 6 has also sought to calculate that into the plan. The addition of the Variax port offers even more new features that are unattainable by any other means. And for the real die-hard Line 6 fans that own the PODHD500X, the Variax and a DT series amp, well, you can imagine just how much is available to you.

Fact is, there is upgrade processing, new footswitches, and a new LED display on the 500X.

Not one other thing has been changed. There are no new models or features or I/O that is not already available on the 500 with the latest firmware.

Kudos to Line 6 for adding a few goodies without raising the price, but let the buyer beware. There is nothing new here.

If you already have a 500 HD and aren’t constantly hitting the DSP wall, you don’t need this.

If you don’t already have one, buy this one.