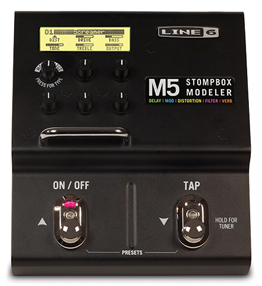 The Line 6 M5 Stompbox Modeler is a multi-effect pedal built to handle like a single stomp box.  When I initially learned that I’ll be honest.  I was a bit skeptical of it and thus I initiated the “shrewd” sequence.  Having played around with it plenty enough I must confess I feel much different about it.

When people start talking about multi-effect pedals usually giant pedals with switches and knobs galore are the first thing that comes to mind.  This pedal, on the other hand, is right down to the bear minimum requirements to be a multi-effect pedal.  With two switches, 6 knobs, and stereo in and stereo out jacks, an expression pedal jack, and midi in and out, the learning curve is probably the smoothest, and easiest to adapt to.

The effects are divided into five categories. Distortion, for all the fuzzes, distortions, overdrives, compressors, and equalizers, filter for filters and wahs, delay, reverb, and modulation for choruses, tremolos, phasers, and flangers.

Of the 6 available knobs, the first one (top left) is also a button that can cycle through the effect types.  Holding that button can take you to a screen to save your own concoctions.  Pushing the tap switch in addition will bring you to a settings menu where you can customize specific details about the pedal.

Past that, turning the model select knob with cycle through the various types of effects in the given category.  The remaining 5 knobs will tweak the various attributes each effect offers to be tweaked.  I don’t think I could make it sound any simpler than that.  Tonally I want to say the M5 sounds most similar to the effects of the X3 line of PODs.  All of the effects are nice, clear, and satisfyingly noise free.

Editor’s Note:  I had read after this was written that the effects in the M5 are the same effects from the 4-button stomp modeler pedals jam packed into one.  A few bugs were also fixed along the way, for what it’s worth.

Taking a quick step back to notion of simplicity, the manual reads as easily as one could hope, not that I really think many people would need it for too many occasions.

The pedal is also stored in an indestructible chassis. I should know this for a fact as I the downward force of my foot in a stomping motion has been documented as being so powerful it can literally crush matter out of existence.  The M5 survived every single time.

While playing with the M5 I did notice a few things that could potentially set some people back. As I’d mentioned earlier the pedal is a multi-effect pedal that works like a single effect.  While that aspect makes the learning curve a veritable plateau, it means you sacrifice the flexability to splice distortion with reverb or delay with modulation for example.  Though if you find you can’t live without splicing effects there is also the M9 and M13 lines available.

Another little contrast I’d noticed was the absence of a USB port.  Initially I thought who cares and wasn’t planning on mentioning that at all, but the pedal’s firmware is updatable, but only through the MIDI I/O ports to a MIDI interface and then to a computer.  I don’t personally own a MIDI interface so I know for a fact there’s at least one person in the world that’s out of luck.

Having said that the M5 still excels in what it’s primarily meant to do.

As a single stompbox that’s capable of as much as it is without sacrificing the convenience to learn, it has versatility on its side.  Plus it’s a lot of fun to play around on.  That has to count for something.  The asking price of $200 also registers as a very reasonable asking price.  Actually to put it in perspective the average distortion pedal alone costs about $90.  This pedal is just a dash over double that.  Considering what all that comes in it calling the price reasonable is an understatement.

This first track is a demonstration various guitars used in the context of a song. All guitars were run through the M5. Enjoy.

And because I’m so clever and thought ahead, here’s a nice, big list of all the various guitar parts in isolation.

Video of the Line 6 M5 Modeler: