Building on the success of their Mobile In device, Line 6’s Sonic Port is a compact interface for your iPad or iPhone that offers great sound and plenty of connectivity. Since it’s designed to be paired with the Mobile POD app, this review will cover both topics. 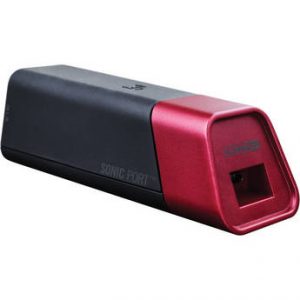 The Sonic Port is housed in a sturdy plastic casing approximately the size of a jump rope handle. As all of the control features are handled between the interface and the app, the unit only contains inputs and outputs and is devoid of any external controls.

The front panel featues 2 inputs (a ¼ jack in, and an 1/8” jack in for connecting another audio device such as a keyboard on an mp3 player), and 2 outs (a headphone out and a ¼ “ stereo out to connect to studio monitors).

Since it’s powered by the IOS device its paired with, 2 cables (30 pin and lightning) are provided with the unit to connect to your iPad, iPhone or 4th or 5th generation iPod touch) it’s literally plug and play.

The Sonic Port converts audio with a 24 Bit/48k resolution with 110 db dynamic range on the ¼” guitar/bass input.

The Sonic Port In Use

I used my wife’s 1st generation iPad as a test for the unit. The first thing I did was to download the free Mobile Pod app. The unit also interfaces with Jammit but I didn’t get a chance to test that pairing. Since the unit is compatible with any CoreAudio App, I also downloaded the Amplitube Fender free app and the free Ampkit app to see how the unit worked with those as well.

The iPad didn’t recognize the Sonic Port at first but once I unplugged the unit and plugged it back in, the Sonic Port sent audio to the Mobile Pod app with no problem.

The Sonic Port, worked exceptionally well with all of the applications that I tried it out with. Latency was negligible and it’s a very transparent unit with substantial headroom and a very low noise floor. it’s easily the best Iphone/Ipad audio converter I’ve heard yet.

There’s a lot to like here and a few small things that I’d quibble about so I’ll start with the good.

The mobile POD app is a free download that seems to be built on the POD FARM software platform. With the app, you get 32 amps 16 effects and 16 speaker cabinets. You also get a built in tuner and access to thousands of presets for various tracks.

Having used several other free apps, it’s a generous platform and provides amps and effects that you’d have to shell out for with any of the competing apps. The ability to switch between cabinets makes a large timbral difference between the tones so that’s a great asset as well (who knew that when given the option of so many 4 x 12 cabinets that the VOX 2 x 12 became my go to when working with any of the Marshalls)?

The effects are all solid. You get a choice of 1 of 2 reverbs, 2 choruses, 2 flangers, a tremolo, a digital delay, a rotary speaker effect, a four-band EQ, a noise gate, an Auto swell, a tuner, a compressor, a wah and a volume pedal.

Since distortion can use a lot of processing power (and since there’s already amp distortion on many of the models above I mentioned) I understand the absence of a distortion pedal here, but it’s still disappointing. I was able to use the compressor to overdrive the signal which was serviceable but not really the same. I understand the inclusion of the wah as you could use it as a filter to dial in and park it on a specific tone – but without a controller, the inclusion of the volume pedal is a bit of a mystery to me.

The Second Quibble (aka “The Soap Box”)

While some models are more responsive than others, I would have given up every amp In the bundle for two or three HD amps from the POD HD500/400/300 units and a handful of effects. PODHD has been out since 2011 so hopefully this app and POD FARM will get the updates they deserve.

Quibbles aside, I can’t tell you the number of times I’ve been in a studio and fought to get tones that were nowhere near as good as what can come out of the box on the Sonic Port. At a $139 list ($99 street) price and a free download for the Mobile POD this is a no brainer if you own a guitar and an iPhone or an iPod.

Could be the second image even smaller?