Luna Guitars: Not For Women Only

“…inspiration for a line of guitars designed to maximize playing comfort came from her mother, Cuban-born Hilda Williers, an electric bass player for more than 40 years.” – lunaguitars.com

Move over Epiphone. Step aside Fender and Squire. Luna Guitars offers skillfully constructed acoustic and electric models with dazzling finishes that are both affordable and comfortable to play. Are you listening? 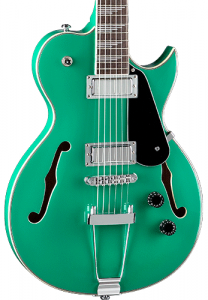 There aren’t many guitar companies that have been founded by women. Luna Guitars, the brainchild of stained-glass artist Yvonne de Villiers, is clearly the exception. What’s more, for de Villiers, it’s not just about selling instruments. Inspiration for getting into the business uniquely came from her mom.

De Villiers’ mother, Hilda Williers, was an accomplished bass player with the blues rock group Sage, formed in the mid-1960s. That’s right, she was a bass player. How many women bass players do you think existed at the time? According to duaneallman.info, an independent blog dedicated to the legendary slide player, Sage, a Florida-based band, had ties to some of the biggest artists from that era, including Iron Butterfly, Blues Image and Duane Allman.

It’s only natural that de Villiers sought to pay homage to the ground-breaking pioneer Williers, who just so happened to be her mother.

That’s when de Villiers came up with the idea for “Players of all genders who’d welcome instruments uniquely tailored to fit their bodies, hands, musical styles and personal tastes. It was with them in mind that Yvonne created Luna Guitars.”

Luna Guitars offers a full line of acoustic and electric models for children and adults.

On the unplugged side, pickers and strummers can choose from several profiles, including parlor and folk sizes to larger grand concert, dreadnaught, jumbo and more. Twelve-strings or nylon, Luna seems to have it covered.
Note the acoustic boxes have a variety of interesting soundhole shapes. What’s more, Luna generally utilizes an assortment of tone woods and impressive finishes, setting the company’s instruments apart from most of its competitors.

For those who prefer to remain plugged in, Luna has several solid and semi-hollow bodies, including the acoustic/electric Athena, featuring a piezo along with traditional neck and bridge pick-ups.

Luna electrics stick mostly to the traditional Strat, Tele and Les Paul shapes; however, they are anything but ordinary. Enthusiasts will find classic “C” style bolt-on and set “V” necks, as well as with the typical black, white and natural finishes. But they’ll also discover “Aqua Mist” and henna designs that resemble tattoos. The Henna Paisley STE in black, with its rosewood fingerboard and laser etched pick-guard, is particularly striking.

Luna Guitars are manufactured in China and sold at most major retailers. In case you were wondering, the company also sells a line of bass guitars. Hilda Williers wouldn’t have it any other way.

If you are in the market for a reasonably priced guitar with eye-catching appeal, check out Luna Guitars. You might be surprised.