Make That Strat Sound Hotter With These Pre-Wired Pickguards

Of course your Stratocaster has a distinct and recognizable sound, but what if you want it to be – well, more metal? Or even more hard rock – just a bit hotter?

There is plenty you can do with effects, amps, and modeling, but if you want that real hot humbucker sound, you’re probably going to have to get your hands dirty.

If you know anything about wiring pickups, you know that it can be a major task – and one that’s none too easy at times.
Luckily for those of us who are unskilled with a soldering iron, or just plain lazy (that’s me) or have little time, there is another option – one that’s almost exclusively limited to the Stratocaster – and that’s the Pre-Wired (sometimes called “Loaded”) pickguards.

The cool part is, it’s not going to cost you more than $300 for a fully loaded pickguard, pre-wired and ready to go.

Lets take a look at two options that will give you humbuckers that are easy to install, and won’t require you to route any wood out.

Rail pickups are designed to give you some of the benefits of a humbucker and fit into the same space as a single coil pickup. You might not get the exact same sound as its bigger brother, but you will enjoy a lack of pickup buzz, and in most cases, get a “hotter sound”.

Some say the bottom end on the rail pickups are better than a single coil, but the crystal clear highs aren’t quite so high, and the mid-range is a bit more prominent than the humbucker.

Another benefit is that without the magnetic pole piece found in traditional pickups, you’ll neatly avoid any string alignment issues that can cause dead spots.

Of course, all of this depends on the exact models you choose, so we’re going to take a look at some pre-wired pickguards that offer the rail option. 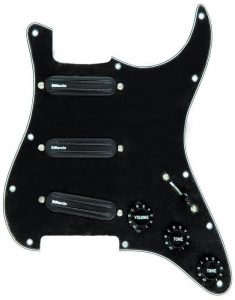 The DiMarzio comes with everything we’re used to on a Stratocaster pickguard, the two tone knobs, volume, and the 5-way pickup selector, all wired up and screwed into the 3-ply pickguard.

On the neck, you’ve got a Pro Track DP188, which is said to have the warmth of a PAF, and provide a nice fat tone, with impressive bottom end.
In the middle position, you’ll find a Fast Track 1 DP 181. It’s very clean and responsive, and has about two times the output of a traditional single coil.
In the bridge position, you’ll meet a monster. It’s the Fast Track 2 DP182 and it offers three times the output of a standard single coil. The bass is punchy, and the mids are ever present and clear.

After you slap this bad boy on your guitar – you might just have the loudest, yet least noisy Strat in the neighborhood – because when you’re not playing, there’s no buzz. These pickups are quiet.

Installation is pretty easy, it consists of screwing two wires (the hot and ground) into a junction box and then screwing in the pickguard itself. 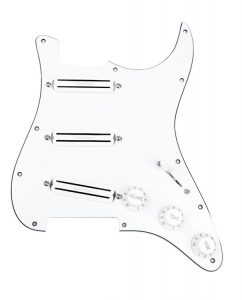 Seymour Duncan’s offering lets you quickly and easily add three Hot Rails Humbuckers into your Stratocaster. The Hot Rails are well known for being quite beastly – in fact they are some of the hottest pickups Seymour Duncan offers.

On top of that, you’ve got the “Liberator” Solderless pickup system, which means you can easily swap out these pickups later, armed with nothing more than a screwdriver. Voila. With this option, you’ve got new pickups and electronics, plus many more options down the road, should your tastes change.

The sound can only be described as aggressive, fat and full. They’re some of the best rail pickups I’ve heard yet.