Metallica’s DVD That Should Not Be 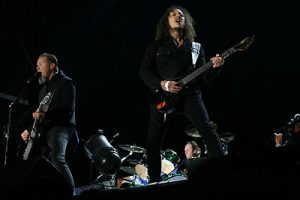 Following closely in the wake of Metallica’s 3D movie, while retaining the itch for releasing recorded concerts the band opted to send out a DVD / Blu-Ray video with two concerts filmed in Quebec City from 2009 during their World Magnetic tour in support of their then newest album Death Magnetic. At the time they were merely preparing to film the aforementioned movie they went ahead and made preparations to record the concerts as well. Since then they’ve had a group hard at work with editing for what will be a two disc release.

Currently it’s so early in development that any additional details including information about release dates, pricing, or bonus features are more or less non-existent. All they’ve really announced is that the DVD will include two concerts, each with its own almost completely different set list, one of which will be toted as the main course of the DVD. The other performance will be reserved to the recesses of the extras section.

Metallica has gone the way of Fox News by just reporting while letting the general public decide which performance gets the honor of being the main attraction via a weekend poll hosted on their web site. There isn’t much time left in it, but if you’re inclined you can put your two cents in here.

Since I’ve already brought it up I may as well round off the current information on their movie in development. I like to think it’s obvious that it’s filmed in 3D and has been funded entirely out of the band’s pocket. The direction it’s gone has been compared to Led Zeppelin’s The Song Remains the Same in that it’s mostly concert performances with tidbits of narrative strewn between songs. It will be released theatrically come summer time of 2013, followed by another DVD / Blu-Ray release