This is the story of a farm boy who started out using a steak bone for a guitar slide – but later went on to tour the United States, coach Bonnie Raitt on her slide technique, and get one of his songs covered by the Rolling Stones. Follow me now way back to the turn of the 20th century…

Fred McDowell was born in Rossville, Tennessee in 1904. He was orphaned young, and picked up his first guitar at age fourteen.

Fred spent most of his life working on farms and in feed mills. In what time he had left, Fred played for tips at local picnics and dances.

Eventually he settled south of Memphis in Como, Mississippi.

Taking to the Road

Then, when Fred was fifty-five years old, Alan Lomax recorded Fred’s virtuoso country blues style for his famous 1959 collection of field recordings. Lomax urged Fred to take his act on the road to play the national folk circuit. Suddenly Fred found himself playing all over the country, attracting the attention of audiences, fellow musicians, and record labels.

Fred recorded his first album, Delta Blues, at age 60. He took up an electric Gibson “Trini Lopez” to replace his resonator acoustic, but told audiences sternly: “I do not play no rock and roll.” He even made that the title of his first electric album, recorded in 1969: I Do Not Play No Rock ‘N’ Roll.

“I do not play no rock and roll, y’all. I just play the straight natural blues. I was raised on the farm, you understand. The only way you can rock Fred is if you put him in a rocking chair, or you gotta lay me down, you understand. That’s my kind of rocking.” —Fred McDowell 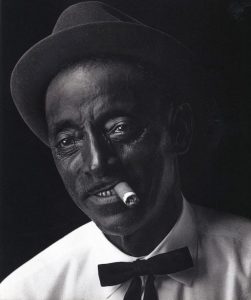 Fred played a very old style of blues guitar he learned from his uncle, who Fred remembers playing slide guitar with a ground-down beef bone.

Fred started off by playing with a piece of bone too, or with a pocket knife–but eventually he switched to a smoother-sounding bottleneck and moved the slide to his ring finger so he could fret with his first two fingers.

It’s this slide guitar work that Fred’s best remembered for. In his travels Fred even coached Bonnie Raitt–now a master herself–on her slide technique.

Fred tuned his guitar to an open D chord: D A D F# A D. One of the very distinctive things about Fred’s style of blues is its droning quality. Fred doesn’t use what we think of as blues harmony; in fact he often doesn’t play chord changes at all, even when the melody implies them. Instead Fred just hypnotically sustains the I chord throughout entire songs. One chord, one key: Fred wore his grooves deeper than a rutted dirt road.

To make up for the lack of harmonic changes, Fred displayed a raucous fingerpicking style, full of moving parts: sophisticated palm muting, thumping bass lines, and melodic slide runs all working together. He wore a thumb pick and a banjo-style pick on his index finger and made deft use of both. At times Fred sounds like a banjo banging and a harmonica roaring all at once.

Fred also had a habit of stopping in the middle of a lyric line to let the guitar finish his thoughts. He liked to let the music speak for him.

“I make the guitar say what I say.” –Mississippi Fred McDowell

What the Blues Are For

Fred felt that the blues were all about using music to get troubles off your mind.

“That’s the way the blues are, when you get off to yourself, sit down, play you two or three pieces, your mind is settled. You get up, put it down, you will be pacified then. You got that off your mind, what you were thinking about.” –Mississippi Fred McDowell 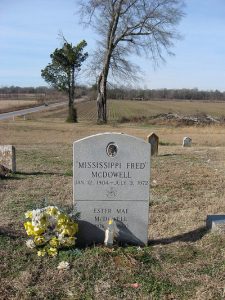 Fred died of cancer in 1972. But by then he’d left farm work behind to play music full-time. He’d seen the United States and toured Europe, and people everywhere had recognized and appreciated the man’s talents.

In addition to blues standards, Fred wrote a few of his own that’ve outlived him. “You Got to Move” was recorded by the Rolling Stones, Sam Cooke, and Aerosmith.

In 1993, Bonnie Raitt paid for a memorial stone with Fred’s portrait to be placed at his grave. The new memorial replaced the old damaged grave marker, which was misspelled to begin with and had since become damaged.

So, like Sister Rosetta Tharpe, Fred got his final resting place upgraded by his admirers.
Fred let his guitar speak for him, and people cared enough about what he said that they’ve kept his name and his music alive. What more could anyone ask for?